The United States-led coalition’s most important partner in the war against ISIS is currently the target of a major Turkish... 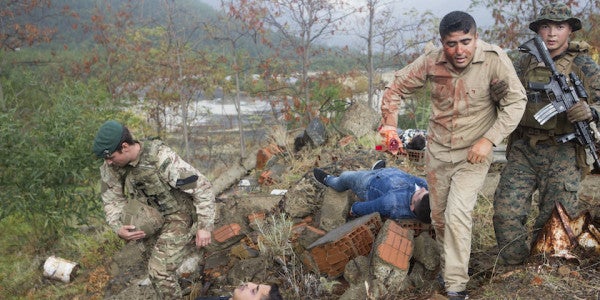 The United States-led coalition’s most important partner in the war against ISIS is currently the target of a major Turkish offensive in northwest Syria that is testing the sincerity of America’s commitment — its “inherent resolve” — to defeating terrorism in the region.

Codenamed Operation Olive Branch, Turkey’s all-out assault on the Kurdish district of Afrin has claimed the lives of at least 90 combatants and 27 civilians since it began on Jan. 20, according to the Syrian Observatory for Human Rights. Afrin is controlled by the People’s Protection Units (YPG), a primary component of the coalition-backed Syrian Democratic Forces that expunged ISIS from its last urban stronghold of Raqqa. Even now that ISIS has been reduced to a sliver of its former self, the YPG remains crucial to the U.S. counterterrorism strategy in the region. However, Turkey — a key NATO ally — considers the group a terrorist organization and a threat to its national security.

The clash between Turkish and YPG forces in Afrin threatens to further diminish the United States’ already dwindling foothold in the Middle East. But it also exposes the limitations of the U.S. military’s approach to counterrorism, which over the past 16 years has come to rely almost exclusively on the tactic of using special operations troops to transform indigenous forces into executioners of American foreign policy. In both Iraq and Syria, the U.S.-led coalition’s swift defeat of ISIS showcased, once again, the extraordinary effectiveness of that strategy in crushing technologically inferior armies — and that, it now seems, is about all it really accomplished.

That the Turkish incursion began several days after the U.S. military announced its intention to convert a portion of the SDF into a border force responsible for preventing an ISIS insurgency from taking root in northeastern Syria is no coincidence. Prior to the Raqqa campaign, the United States “loaned” the SDF roughly $1 billion worth of weapons and equipment. The Pentagon’s assurance that the arsenal would strictly be used against ISIS did little to quell Turkey’s fears that the Kurds are attempting to exploit their cozy relationship with the United States to establish an independent Kurdish state. As threatening as ISIS seems to America and its Western allies, the mission to thwart the group’s resurgence in the region is not a priority as far as most of the players on the battlefield are concerned.

“Our concern is that violence in Afrin disrupts what we had determined to be a relatively stable area of Syria,” Pentagon spokesman Eric Pahon told Task & Purpose. “ISIS had been expelled from those areas and it distracts from our overall international efforts to defeat ISIS.” Adding, “We are asking for a de-escalation and a refocus back to defeating this absolutely terrible terrorist group, which is an enemy of everybody in the region.”

But it’s not the only enemy. Despite warnings from President Donald Trump that Operation Olive Branch could jeopardize shared U.S.-Turkish goals in Syria, Turkish President Recep Tayyip Erdogan said on Jan. 24 that the operation will continue until “the last member of the terror organization is neutralized.” Erdogan vowed that once Afrin is “clean” he will deploy his troops and their Syrian allies to Manbij, where American forces have been stationed since the U.S.-led coalition backed a Kurdish offensive to retake the town from ISIS in 2016.

The following day, Turkey’s deputy prime minister, Bekir Bozdag, reiterated his government’s commitment to see the operation through. “Those who support the terrorist organization will become a target in this battle,” he told Reuters. “The United States needs to review its soldiers and elements giving support to terrorists on the ground in such a way as to avoid a confrontation with Turkey.”

While Russia denies Erdogan’s claim that he consulted Moscow prior to launching the operation, there is hardly any reason to suspect Erdogan isn’t telling the truth. Russia controls the airspace over Syria west of the Euphrates — where Afrin is located — and Turkish warplanes have been pummeling the district since Olive Branch kicked off. What’s more, the liberation of Raqqa has left both the U.S.-led coalition and the SDF in the precarious position of no longer being of any use to Moscow, which has poured billions of dollars in weapons into Assad’s arsenal since the start of the war. The Turkish advance through Syrian Kurdistan seems to indicate that America’s enemies — namely, Russia and Iran — are operating under the assumption that Washington lacks the willpower to safeguard its strategic interests in the Middle East if doing so requires the mass deployment of conventional forces.

That would be a safe assumption. Over 16 years of perpetual conflict, the U.S. military has grown staggeringly efficient at killing terrorists, while the American public has become increasingly less tolerant of U.S. service members getting killed. The compromise is the version of the Global War on Terror being waged now. Every day, American ordnance and commandos are killing terrorists throughout the Middle East, North Africa, and Southwest Asia in droves. Progress is largely measured in the numbers of bombs dropped and bodies stacked — and also by how few U.S. troops get killed in the process. We tend to refer to raids in which American commandos are killed as “botched” and “catastrophic,” but treat them as flukes and little more. One would think that after all of that ass we kicked in Mosul and Raqqa, America would have reclaimed its rightful place at the top of the food chain.

But the situation unfolding in Syria right now suggest that’s not the case. Assad has made it explicitly clear that returning every inch of Syria to his control is his ultimate objective, and the presence of a 30,000-man Kurdish army armed with American weapons and equipment certainly does little to serve that goal. Fortunately for Assad, the U.S. military’s mission in Syria falls strictly within the confines of counterterrorism, despite the fact that the U.S. State Department perceives the Syrian dictator as more than just a danger to his country. “Assad’s grand strategy, to the extent he has one beyond his own survival, includes hosting some of the most radical terrorist elements in the region and using them to destabilize his neighbors,” Secretary of State Rex Tillerson said in a speech at Stanford on Jan. 17.

Tillerson accused Assad of not just backing al-Qaeda in Iraq but ISIS itself, claiming there was evidence that the regime had abetted the terror group “by releasing known terrorists from Syrian prisons and turning a blind eye to” to its growth, adding that “in spite of the threat ISIS posed in Syria, Assad focused instead on fighting the Syrian opposition, even with Iranian and Russian military support at its back.”

It could be argued, however, that the U.S.-led coalition’s entry into the Syrian war gave Assad and his allies the freedom to focus on eradicating the myriad opposition groups fighting to topple the regime, while also reducing the risk of a U.S. military intervention like the one that allowed Libyan rebels to swiftly dispose of Muammar Gaddafi at the height of the Arab Spring. When President Barack Obama formed the anti-ISIS coalition in 2014, he invoked the authorizations for the use of military force that Congress agreed to in 2001 and 2002 as the legal basis for the campaign, which meant that the fight to, as Obama said, “degrade, and ultimately destroy, [ISIS],” would strictly be a War on Terror campaign. The Pentagon appears determined to stick to that mandate, and may even be prepared to prematurely end the mission in Syria to avoid stepping out of bounds.

Airmen deliver fuel to coalition bases in Iraq in support of Operation Inherent Resolve Dec. 16, 2015. OIR is the coalition intervention against the Islamic State of Iraq and the Levant.

“Certainly, we don’t want to see the Assad regime expand its area of influence, or return to areas near Afrin,” Pahon, the Pentagon spokesman, told Task & Purpose. “But as far as the Department of Defense goes, our focus is the counter-ISIS fight. … We are acting in self-defense of our homeland and our allies — taking down ISIS so they can’t plot external attacks and come to the United States, or attack inside Iraq.”

Pahon expressed confidence that the United States would succeed in resolving the unfolding crisis in Syrian Kurdistan diplomatically, and said he wouldn’t “pontificate on the worst-case scenario possibilities” when asked whether he could envision a situation in which United States would intervene militarily to halt a Turkish advance. U.S. ground troops have successfully diffused tensions between the Turks and Kurds in northern Syria before, but that was prior to the liberation of Raqqa.

However, that’s not to say we haven’t seen the “worst-case scenario” play out since the anti-ISIS campaign began. In October, several months after coalition-backed Kurdish peshmerga and Iraqi troops liberated Mosul, U.S. commandos looked on from a safe distance as the Iraqis advanced on Kirkuk, which the peshmerga seized in 2014. As in Syria, the offensive was launched amid growing fears that the Kurds would attempt to use the American weapons and training they acquired in the fight against ISIS to carve out a fully autonomous state. The Iraqi forces, bolstered by Iranian-backed Shiite militias, ultimately succeeded in taking the city.

For all the bluster about body counts and killing terrorists with e-tools, the U.S. military still understands that the key to any successful counterterrorism campaign is ensuring that we don’t leave the battlefield more chaotic than it was before we showed up. If bombing ISIS back to the Stone Age is step one, step two is making sure ISIS 2.0 (or AQI 3.0) doesn’t bloom from the rubble. The Pentagon’s new national defense strategy acknowledges this, placing extra emphasis on building a network of ironclad alliances and partnerships to keep America’s enemies from expanding their influence into the power vacuums we create every time we drop the hammer.

But that’s not something we haven’t tried before. In fact, we’re trying it now. Pahon explained that since the conclusion of the Raqqa operation, the roughly 2,000 American troops in Syria have shifted their focus to helping “create stability and security.” The SDF, he explained, are being taught how to clear minefields and rebuild essential infrastructure, including a bridge in Raqqa that was destroyed in the fighting. Whether due to a lack of patience, or manpower, or wherewithal — or all of the above — this is the part that gets us every time. Nobody can say we’re not serious about the War on Terror. Nearly 7,000 Americans have been killed attempting to fulfill President George W. Bush’s promise of finding, stopping, and defeating “every terrorist group of global reach.” It’s just that our commitment starts to wane after the ass-kicking gives way to the more tedious — and more important — stuff. After 16 years, it seems both our allies and our enemies have caught on. They’ll take it from here.