Now That ISIS Is Routed, What Happens To All The Weapons The US Gave Syrian Fighters?

American weapons and equipment used by the Syrian Democratic Forces (SDF) in the fight against ISIS will need to be... 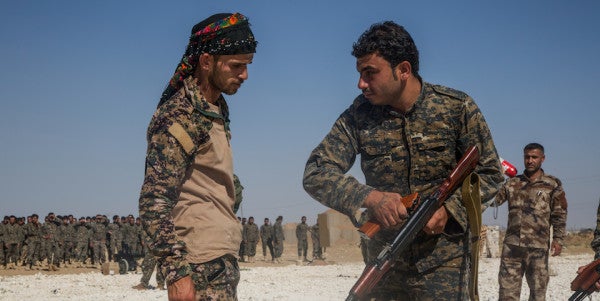 American weapons and equipment used by the Syrian Democratic Forces (SDF) in the fight against ISIS will need to be returned to the United States once the war is over because they were loaned — not given — to the group, the White House says. But details on when the recovery process will begin, and how it will be executed in a country embroiled in a bloody six-year civil war, remain very murky, raising skepticism among those familiar with the Pentagon’s long history of losing track of lethal machinery it lends to foreign troops.

The U.S. began arming members of the SDF — an alliance of Kurdish and Arab militias considered rebels by the Russian- and Iranian-backed Syrian regime — in May 2017 as part of a strategy authorized by President Donald Trump. The plan was adamantly opposed by Turkey, a NATO ally, which has been applying increasing pressure on the U.S. to withdraw support from the group altogether. Turkey deems the Kurdish People’s Protection Units (YPG), a primary component of the SDF, a terrorist organization.

Pentagon officials said in May that arms supplied to the SDF — a $1 billion arsenal that included heavy machine guns, Humvees, and thousands of new M4 rifles, the same weapons wielded in combat by American troops — would be closely tracked as they flowed into war-torn Syria. But the region was already notorious for disappearances of U.S.-procured arms; a 2015 Amnesty report found that, “much of ISIS’ equipment and munitions comes from stockpiles captured from the U.S.-allied Iraqi military and Syrian rebels,” according to CNN.

Operation Inherent Resolve spokesman Col. Ryan Dillon tweeted from Baghdad in June that the Pentagon had devised a system to ensure that “every single one of these weapons that will be provided to our partner forces will be accounted for and pointed at #ISIS.” But the system he described doesn’t seem that sophisticated — or at least not sophisticated enough for the monumental task of retrieving weapons from an armed group fighting a three-way war with Turkey, ISIS, and the Syrian regime.

Dillon said that before they received their weapons from coalition trainers, SDF fighters would go through a vetting process and then sign a documented agreement to “fight only ISIS and uphold the laws of armed conflict.” Additionally, U.S. military commanders would “sign for, by serial number, all the equipment that we are giving and we’ll maintain that in our database,” Dillon said, adding that the weapons would be tracked by coalition forces on the battlefield.

Such methods have proven not so effective in the past. A 2016 investigation by London-based charity Action on Armed Violence, which monitors weapons proliferation and violence against civilians, concluded that DoD officials only had records for less than half of the 1.5 million firearms the Pentagon had funneled into the hands of foreign troops in Iraq and Afghanistan over the previous 14 years.

The U.S. has worked closely with the YPG, the armed wing of the Syrian Kurdish Democratic Party, since at least 2014, when ISIS rampaged across the region, seizing key cities on both sides of the Iraq-Syria border. A coalition-backed offensive spearheaded by the SDF has succeeded in driving ISIS out of all of its major strongholds in Syria, including its de facto capital Raqqa, which was wrested from the terror group’s control in October 2017. It is believed that the ISIS ranks have dwindled down to 3,000 fighters from a peak strength of 45,000, according to Al-Monitor.

On Nov. 27, a top Turkish diplomat announced that Trump had finally acceded to pressure from his government, promising in a recent phone call with President Recep Tayyip Erdogan of Turkey that the U.S. would stop backing Syrian Kurds. However, when asked by a reporter the following day if the U.S. was “backing away from its previous support of a partner in the fight against ISIS,” White House spokeswoman Sarah Huckabee Sanders seemed to imply that wasn’t the case.

“No,” Sanders replied. “Look, once we started winning the campaign against ISIS, the plan and part of the process is to always wind down support for certain groups. Now that we’re continuing to crush the physical caliphate, that we’re in a position to stop providing military equipment to certain groups. But that doesn’t mean stopping all support of those individual groups.”

Meanwhile, as Al-Monitor notes, the 2018 National Defense Authorization Act allocates “another $500 million to the fight against [ISIS] in Syria until next September.” That money will reportedly go arming an additional 5,000 coalition-allied troops, including Syrian Kurds, with AK-47s, heavy machine guns, and sniper rifles, while $21 million more will pay for their stipends.

Some of the $500 million will reportedly also be spent on building temporary facilities to securely store arms and ammunition.