US Military To Remain In Syria ‘For Decades,’ Militia Claims

The U.S. plans on maintaining a robust military presence in Syria for decades after the defeat of ISIS militants, a … Continued 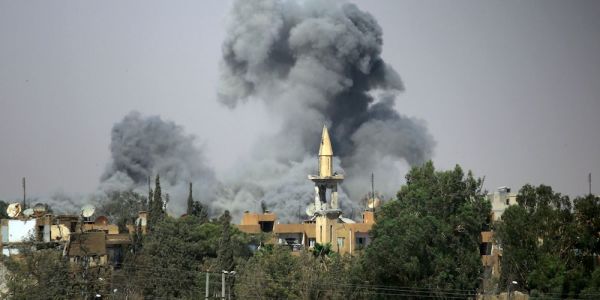 The U.S. plans on maintaining a robust military presence in Syria for decades after the defeat of ISIS militants, a spokesman for the Department of Defense’s primary Syrian ally told Reuters on Aug. 17.

The U.S. has “a strategy policy for decades to come” in Syria, Talal Silo, a spokesman for the Syrian Democratic Forces militia alliance, told Reuters. “There will be military, economic and political agreements in the long term between the leadership of the northern areas (of Syria)… and the U.S. administration.”

The SDF has been the Western coalition’s main local partner in the three-year-old campaign against ISIS. In response to Silo’s statements, Operation Inherent Resolve spokesman Col. Ryan Dillon told Reuters that there would still be “still a lot of fighting to do, even after ISIS has been defeated in Raqqa,” but he didn’t offer any ballpark figures on how much fighting, for how long. A Pentagon spokesman bluntly told Reuters that the DoD “not discuss timelines for future operations.”

“ISIS remains a deadly enemy, capable of fierce resistance and terror attacks,” a Pentagon spokesman told Task & Purpose. “It would be inappropriate to place a timetable on the ultimate defeat of ISIS.”

On August 16, the coalition announced that the SDF had expelled ISIS forces from more than half of Raqqa, the jihadists’ de facto capital and last remaining stronghold after their defeat in the Iraqi city of Mosul in July. In Iraq, coalition troops and Iraqi security forces are poised to flush the country’s remaining ISIS remnants from the Nineveh province.

It’s possible that the SDF, founded by Syrian Kurdish YPG militias to fight against ISIS in 2015, floated its claim to achieve a specific goal. In recent weeks, the various non-governmental militias have worried that OIR will simply abandon rebels like the Free Syrian Army in the struggle against the Assad regime, an anxiety exacerbated by the Trump administration’s July decision to pulled covert aid for one militia that had deviated from its counter-ISIS mission to launch attacks on government forces.

But it’s also possible the statement was crafted to force the Pentagon into actually formulating a long-term plan, because the DoD doesn’t appear to have one. In June, as the tempo of airstrikes and special operations raids against ISIS was growing, Task & Purpose sought comment from stakeholders on Capitol Hill, at the DoD, and in the Department of State on their exit strategies for U.S. forces in the region after OIR’s mission is completed.

“These are largely political questions outside of what it is that we have been directed to do: defeat ISIS,” OIR spokesman Dillon told Task & Purpose at the time. The State Department never responded to multiple requests for comment.

But Rep. Tom Cole — a Republican from Oklahoma, a member of the Defense Subcommittee of the House Appropriations Committee, and one of several lawmakers intent on reining in America’s forever wars with a new Authorization for the Use of Military force — was a bit more blunt in his response to Task & Purpose.

“I don’t think a plan’s been fully formulated,” he said. “Nobody I’m aware of in Congress has a clear idea about what that endgame will be.”