Russians Bomb US Allies And Their Advisers In Surprise Syria Strike

In a shocking sortie that could sour the already contentious relationship between global powers, the Russian military attacked “a location... 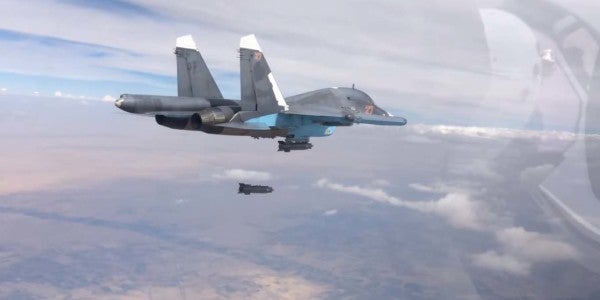 In a shocking sortie that could sour the already contentious relationship between global powers, the Russian military attacked “a location known to the Russians to contain Syrian Democratic Forces & Coalition advisors” on Sep. 16, U.S. military officials said.

“Russian forces struck a target east of the Euphrates River in Syria near Days Az Zawr, causing injuries to Coalition partner forces” on Saturday morning, according to a press release from the headquarters of Combined Joint Task Force Operation Inherent Resolve, which oversees the U.S.-led fight against ISIS in Syria and Iraq.

The fighters hurt in the Russian fusillade were members of the Syrian Democratic Forces, an umbrella organization of mostly Kurdish and Arab militias aligned with the U.S. military to defeat ISIS. While OIR representatives didn't specify whether American troops were on the ground with the SDF during the attack, they did say in their release that “Multinational Coalition troops advising the SDF were present but not wounded as a result of the Russian strike.”

The Russian military, which has bases in Syria and enjoys a client relationship with the nation's hereditary dictator, Bashar al-Assad, has said it supports the U.S. campaign against ISIS in the nation. But in the broader Syrian civil war in which ISIS gained a foothold, some of America's SDF allies also oppose Assad's continued rule, and his backing from Russian and Iranian leadership.

Those and other simmering international tensions in Syria led the U.S. and Russia to open a “deconfliction line” to make sure the powers' military operations didn't butt heads. But butt heads they have: After a U.S. Navy pilot shot down a Syrian Air Force jet last summer, the Russians threatened to target coalition aircraft.

The latest attack on U.S. allies could portend larger problems in America's relationship with Russia, which has also been strained by diplomatic retaliations and suspicions over the country's alleged interference in the 2016 U.S. presidential election campaign.

But the U.S. military's top commander in Syria struck a surprisingly conciliatory tone in his first comments about the strike. “Coalition officials are available and the de-confliction line with Russia is open 24 hours per day,” Lt. Gen. Paul E. Funk II, chief of CJTF-OIR, said in the command's press release. “We put our full efforts into preventing unnecessary escalation among forces that share ISIS as our common enemy.”