Are adversaries of the U.S. funneling arms and ammunition to the Taliban? The Department of Defense seems to think so... 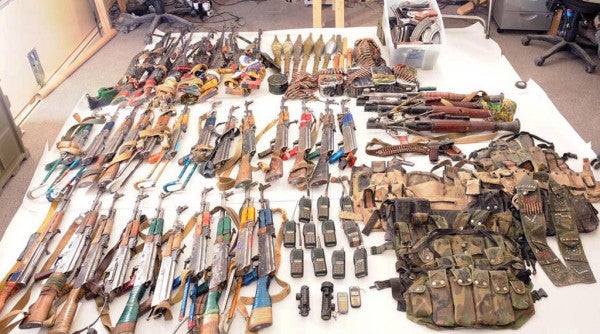 Are adversaries of the U.S. funneling arms and ammunition to the Taliban? The Department of Defense seems to think so — sort of.

Just hours after Secretary of Defense James Mattis was greeted in Afghanistan by a brazen Taliban rocket attack on Hamid Karzai International Airport in Kabul on Sept. 27, anonymous U.S. military officials told the Wall Street Journal that the weaponry and equipment had been provided by Russia and Iran to “strengthen” the militants, a trend that American officials (and media outlets) claim has accelerated over the last two years. But when asked for his assessment of Russian and Iranian material support during a press conference with NATO Secretary Jens Stoltenberg and Afghan President Ashraf Ghani in Kabul later that day, Mattis delivered a somewhat cryptic response.

“I would just put it this way: Terrorism is a scourge for everyone in this world,” Mattis told the Associated Press’s Tom Watkins during the Sept. 27 presser. “Those two countries that you've mentioned, Tom, have both had — suffered losses due to terrorism. So I think it'd be extremely unwise to think that they can somehow support terrorists in another country and not have it come back to haunt them.”

But on another level, it’s also a weird little self-own. Mattis’ broad condemnation of weapons transfers came just days after the Special Inspector General for Afghanistan Reconstruction (SIGAR) published a damning report detailing the horrible job the Pentagon does at keeping weapons and equipment end of up in terrorist hands — and just days before Politico reported, citing Pentagon and State Department sources, that the Trump administration planned on easing restrictions on international weapons sales that, while creating jobs at home, would likely end up increasing the flow of U.S.-made arms into militant stockpiles.

First, it’s worth noting that evidence of Russian arms transfers to Taliban fighters is scarce at best. Most accounts of Russian weapons on the battlefield come from U.S. military and defense sources, and when questioned by the Wall Street Journal during an April visit to Kabul regarding allegations of an 18-month increase in small arms transfers, Mattis replied that “the jury is still out” on the “granularity” of Russia’s strategic competition with the U.S. in Afghanistan. (Gen. John Nicholson was a bit more direct when asked about Russian transfers: “I’m not refuting that.”) Two months later, CNN published two “exclusive” videos showing Taliban fighters wielding Russian-made small arms they claimed had come from neighboring Tajikistan.

Unfortunately, it’s near-impossible to tell if the weapons brandished by militants are evidence of foreign arms transfers. Small arms experts interviewed by Task & Purpose in June noted that the various Kalashnikov assault-rifle variants, 7.62 mm general-purpose PK machine gun, and TT-30 Tokarev pistol brandished by Taliban fighters in the CNN videos have likely been circulating around the country since the Soviet campaign there in the 1980s. Their alleged ties to recent arms transfers were divined from unreliable Taliban commanders and the presence of shiny accessories like a Chinese-made JGBG M7 rifle scope, the latter of which experts say are easily purchasable on the internet.

Indeed, some of those Soviet-era weapons and equipment come from the U.S. A recent Special Investigator General for Afghanistan Reconstruction report noted that initial U.S.-led efforts to equip the Afghan National Army involved “equipment and weapons seized during military operations or donated by former Soviet-bloc nations,” an appropriate choice given the ubiquity of the AK-47 and 7.62mm ammunition among Northern Alliance forces. And while the DoD reconsidered its use of donated Soviet-style weapons in 2005, it’s likely that many of those weapons fell through the cracks with the 700,000 other U.S.-supplied firearms that have gone missing from Iraqi and Afghan armories since 2002 (and the 43% of weapons provided to the Afghan National Security Forces that went missing as of 2014, according to a recent SIGAR report).

And that hasn’t stopped the U.S. from funneling even more Soviet-style weapons to regional allies across the Middle East — and, incidentally, the black markets that supply militant groups like ISIS and the Taliban. A Sept. 12 report from the Organized Crime and Corruption Reporting Project found that the U.S. had fed up to $2.2 billion in Soviet-era arms and ammunition to Syrian rebels fighting ISIS as part of the three-year-old multinational campaign, arms purchased U.S. Special Operations Command and the Picatinny Arsenal and distributed through the Black Sea.

Related: The DoD Has A $700 Million Ammunition Problem In Afghanistan »

While a DoD spokesman told OCCRP that the Pentagon “expect any partnered force or security assistance recipient to use the materials as intended,” American officials confirmed in July 2016 that plenty of the weapons sent Syrian rebels by the CIA through Jordan ended up in the hands of black market arms dealers — including the same weapons used to kill two American military trainers in 2015. The DoD’s response echoes OIR spokesman Col. Ryan S. Dillon’s July assertion that new above-board weapons transfers to Syrian Democratic Forces announced that month would be subject to rigorous scrutiny by both coalition and regional military officials — a nice sentiment, but a promise that remains remarkably difficult to keep.

And it’s not just for Soviet-style weapons: Of those 1.5 million firearms provided to Iraqi and Afghan security forces since 2002, some 978,000 were the M16 and M4 assault rifles, according to an analysis of defense contracts by the weapons proliferation non-profit Action on Armed Violence. Of the various weapons brandished by Taliban fighters in the CNN video, the only weapon not a regular fixture of regional black markets was the U.S.-made M249 Squad Automatic Weapon that fires belt-fed 5.56×45mm NATO rounds. In the last three months, a FGM-148 Javelin anti-tank missile and launcher turned up among an ISIS weapons cache in Iraq; a Taliban propaganda video showed fighters touting a FN SCAR (Special Operations Forces Combat Assault Rifle) 7.62mm rifle decked out with extra accessories; and a 7.62mm Mk 14 Enhanced Battle Rifle was “prominently” featured in a lengthy highlight reel of ISIS’s defense of Raqqa; just days after Mattis’ comments in Kabul, another Raqqa video showed off U.S.-made 84mm AT-4 rocket launcher.

To be fair, the Trump administration has moved to tighten controls on arms transfers. Trump moved to end the CIA weapons transfer program in July, telling the Wall Street Journal, ”It turns out it’s — a lot of [Al Qaeda] we’re giving these weapons to.” Shortly thereafter, the DoD announced that it would for the first time end of military support for a Syrian rebel group for using U.S.-supplied weapons on missions outside of OIR’s strict anti-ISIS mandate — namely going AWOL from the At Tanf garrison that saw escalating clashes and tensions between OIR and pro-regime forces this summer.

But in terms of keeping weapons out of ISIS, Taliban, and Al Qaeda hands, these gestures are trumped by the $48 billion in U.S. arms transfer notifications that occurred in the first eight months of 2017, double the same period in 2016 according to the Center for International Policy’s Security Assistance Monitor. Despite the fact that the Institute for Science and International Security insisted that lax regulations will lead to increased proliferation among “nefarious” non-state actors, the National Security Council apparently thinks of the arms trade in terms of economics rather than warfare telling Politico that the administration “has undertaken a review of our policy on arms sales and wherever possible is working to remove unreasonable constraints on the ability of our companies to compete.”

Mattis’ warning to Russia and China, then, may just as well apply to the U.S.: Weapons transfers aren’t about business, but life and death — and the U.S. is in no position to point the finger at other nations regarding their ubiquity of foreign battlefields when American service members are fighting and dying.