Mattis Says The Taliban Is On Its ‘Back Foot,’ And No, He Wasn’t Making A Funny Joke

Defense Secretary Jim Mattis said Tuesday that the Taliban has been put on their “back foot,” and before you start... 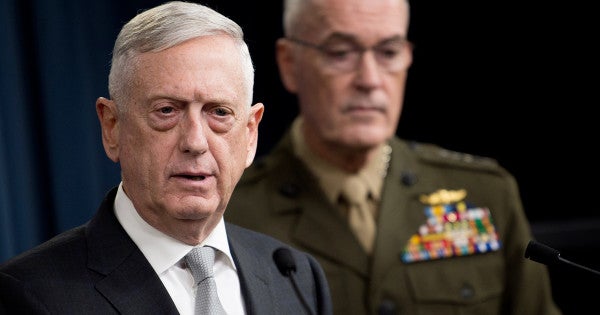 Defense Secretary Jim Mattis said Tuesday that the Taliban has been put on their “back foot,” and before you start to laugh at that very funny joke, I have to tell you that it wasn't actually a joke.

Mattis said this in a non-sarcastic tone, without any hint of comedy.

While speaking with Pentagon reporters, Mattis lauded strikes against Taliban drug labs, but cautioned, “you can break them apart in terms of what organization they’re part of, but their goal is to destabilize the elected government.”

Although I've come to expect rosy, and often ridiculous assessments from people like Gen. Joe Dunford and Pentagon flacks, Mattis has been more circumspect in talking about the nearly 17-year-old war.

In a June 2017 hearing on Capitol Hill, for example, Mattis told lawmakers, “We are not winning in Afghanistan. We will correct that.” That was just 11 months ago, before a “new” strategy was implemented.

The U.S. military has deployed more troops, carried out more air strikes, and has loosened rules of engagement. For all that effort, it has not changed the reality on the ground at all.

Let's take a look at the numbers: According to the Pentagon's own data, in Feb. 2017 the Afghan government controlled or influenced 60% of its 407 districts. It reported 29% of districts were contested, while 11% were under full control of the Taliban.

“The Taliban continue to maintain its grip on half of Afghanistan, despite US military’s reinvigorated effort to force the group from its strongholds,” writes Long War Journal, which has been tracking who controls each district in Afghanistan since summer 2015.

Therefore, according to LWJ’s data, the Taliban controls or contests 239 of Afghanistan’s 407 districts, or 59%.”

Yeah. They're on their back foot.