Pompeo: The Taliban, Who Live In Afghanistan, Cannot ‘Wait Us Out’

Secretary of State Mike Pompeo made a surprise visit to Afghanistan earlier this week, where he visited with troops stationed... 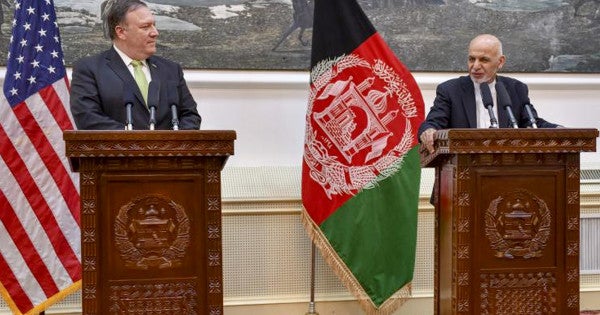 Secretary of State Mike Pompeo made a surprise visit to Afghanistan earlier this week, where he visited with troops stationed at Disneyland Afghanistan, aka Bagram Air Base.

Per the official readout from the State Department, Pompeo apparently reiterated that “the Taliban cannot win on the battlefield, cannot wait us out, and will ultimately have to settle their differences with the Afghan government at the negotiating table.”

It's interesting how the collective delusion of our political leadership continues amid a 17-year-long conflict — one that NATO has just agreed to keep funding to at least 2024. And sadly, it's not just Pompeo: even Defense Secretary Jim Mattis, who told Congress in June 2017 that “we are not winning in Afghanistan,” changed his assessment to say the Taliban has been put on their “back foot” less than a year later.

What made him come to that assumption? The hell if I know.

According to the Pentagon’s own data, in February 2017 the Afghan government controlled or influenced 60% of its 407 districts. It reported 29% of districts were contested, while 11% were under full control of the Taliban.

“The Taliban continue to maintain its grip on half of Afghanistan, despite US military’s reinvigorated effort to force the group from its strongholds,” wrote Long War Journal, which has been tracking who controls each district in Afghanistan since summer 2015.

Therefore, according to LWJ’s data, the Taliban controls or contests 239 of Afghanistan’s 407 districts, or 59%.

The Taliban can't wait us out? Hello, they live there. I think they absolutely can.

Meanwhile, the U.S. is considering reviewing its “strategy” in Afghanistan for the umpteenth time.