The US still doesn’t know how many Afghan security forces actually exist, surprising no one

In other news, water is wet 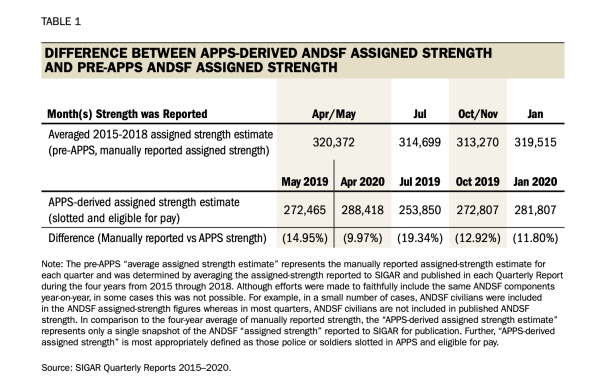 The presence of local Afghan police in contested provinces across the country has likely been grossly overstated, according to a new U.S. watchdog report. yet another sign that existing data on Afghanistan's fragile security forces doesn't come close to actually reflecting its real-life strength.

According to data from the Combined Security Transition Command-Afghanistan, a recent Afghan government assessment revealed that between 50 and 70 percent of police positions in a handful of provinces were “ghost soldiers.”

The term “ghost soldiers” refers to the problematic practice of fabricating (and usually inflating) the number of military and security personnel, and has been the focus of multiple reports from the Special Inspector General for Afghanistan Reconstruction over the years.

The latest SIGAR report, which covers reconstruction efforts in Afghanistan from April 1 to June 30, 2020, indicates that these alarming personnel shortfalls were found in the Kandahar, Zabul, Helmand, and Uruzgan provinces of the country, several districts of which are currently contested by the Taliban.

Related: Afghanistan's security forces lost 42,000 troops in the last year in a crackdown on 'ghost soldiers'

The U.S. has been aware of the issue of ghost soldiers for years: Indeed, a 2019 SIGAR report indicated that the Afghan National Defense and Security Forces personnel strength had declined by 10 percent over the previous year after a new system purged 42,000 non-existent soldiers from the rolls.

But according to the latest SIGAR report, the CSTC-A's new integrated electronic system — the Afghan Personnel and Pay System, or APPS — revealed that the gap between the ANDSF's true end strength and previously recorded levels was actually closer to 58,478 fewer personnel.

Unfortunately, CSTC-A has no confidence in ever being able to resolve this ghost soldier gap even with its new system in place, telling SIGAR that the CSTC-A “does not expect that the APPS-reported data will ever equal the amount that was self-reported [by the Afghans].”

The reason? Corruption within the Afghan government, of course. From the SIGAR report:

Around the same time, SIGAR’s Investigations Directorate found that MOD and MOI officials created fraudulent payroll records to obtain payments to nonexistent ANDSF personnel. Working jointly with Afghan investigators and SIGAR auditors, SIGAR investigations staff have assisted the Afghan government in an attempt to return ill-gotten funds and prosecute Afghan officials in Afghan courts. In doing so, SIGAR has identified a number of sophisticated schemes to divert payroll funding, and several hundred police personnel records that have been tampered with that are linked to ghost personnel. Further, sources told SIGAR that Afghan government auditors responsible for overseeing MOI funding and documentation have been negligent in their assigned duties and have resisted follow-up audits

Again, this is all extremely unsurprising. Back in 2016, a SIGAR report found that of the nearly 350,000 ANDSF troops that were purportedly on the government's payroll, nearly 200,000 of them were ghost soldiers, with the money likely being distributed among corrupt government officials.

Related: Nobody knows how many Afghan security forces really exist, and the US can’t fix it

But the apparent absence of security forces across various districts, on the local level, couldn't come at a worse time. According to the SIGAR report, Afghanistan’s National Security Council (NSC) claimed Taliban attacks increased between June 14 and 21 with 422 attacks in 32 provinces that killed 291 ANDSF personnel and wounded 550 others — making it the “deadliest [week] of the past 19 years.”

“Peace talks between the Taliban and the Afghan government have yet to begin, Taliban attacks on Afghan security forces have surged, and the COVID-19 pandemic has cast a huge shadow over Afghan daily life,” according to the SIGAR report.

Translation: Afghanistan needs a stable security force right now — and according to the report, it simply doesn't exist and likely never will.

There are currently 8,600 U.S. troops in Afghanistan, the Pentagon announced in late June.