“President Biden must do everything in his power to fix this." 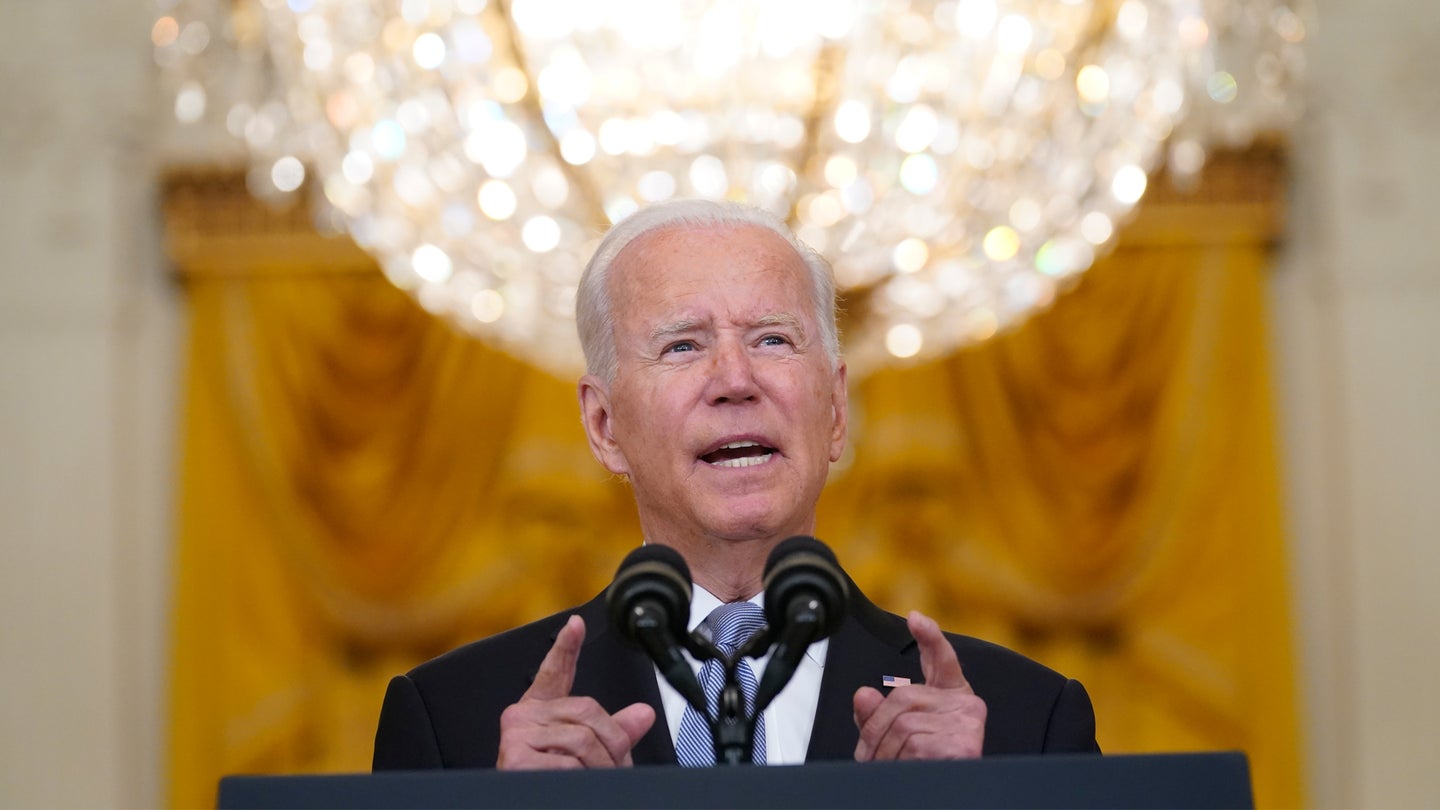 President Joe Biden said on Monday that the “buck stops with me” when it comes to the chaos unfolding in Afghanistan moments after placing the majority of the blame on the Afghan military, government, and its people.

“I stand squarely behind my decision,” Biden said of the withdrawal. “After 20 years, I’ve learned the hard way that there was never a good time to withdraw U.S. forces. … The truth is, this did unfold more quickly than we had anticipated. So what’s happened? Afghanistan political leaders gave up and fled the country. The Afghan military collapsed, sometimes without trying to fight. If anything, the developments of the past week reinforced that ending U.S. military involvement in Afghanistan now was the right decision.”

Moments later, however, he said he is “President of the United States of America, and the buck stops with me.”

Biden explained during his address how the U.S. worked over the years to prop up the Afghan national security forces, spending “over a trillion dollars” and training and equipping “an Afghan military force of some 300,000 strong.”

What he didn’t mention was that there have long been concerns over the capabilities of the Afghan military — which has suffered thousands of losses in the fight against the Taliban over the years — and that the rapid deterioration of the situation in Afghanistan was forewarned by military commanders for weeks before the militant group’s lightning advance on Kabul.

While Biden pinpointed the number of Afghan troops at roughly 300,000 during earlier remarks in July, it was reported years ago that the actual number is significantly less than that. Afghan officials have said as far back as 2016 that thousands of people registered in the Afghan forces were “ghost” soldiers, people whose names were on the payroll but who weren’t actually fighting.

The head of Helmand’s provincial council, Karim Atal, told the Associated Press that roughly 40 percent of registered forces did not exist.

“When we say we have 100 soldiers on the battlefield, in reality it is just 30 or 40,” Ghulam Hussain Nasiri, an Afghan lawmaker, told the AP.

“No one knows the exact numbers of the Afghan National Defense Forces,” another Afghan official added, estimating that the actual number of Afghan forces sits somewhere around 120,000 people.

In response to the AP’s report, the Office of the Special Inspector General for Afghanistan Reconstruction (SIGAR) recommended a series of changes in how the U.S. determined who they were paying.

“[O]ur work shows that neither the United States nor its Afghan allies truly know how many Afghan soldiers and police are available for duty, or, by extension, the true nature of their operational capabilities,” John Sopko, the special inspector general for Afghanistan reconstruction, told Congress in 2016. A SIGAR report in 2020 said those recommended changes saved the U.S. millions as commanders cut thousands of “ghost” soldiers from their payrolls.

Sopko also said in 2016 that an assessment he received from U.S. Forces-Afghanistan described the performance of the Afghan forces “as uneven, with numerous, high-profile tactical and operational setbacks detracting from its overall success in preventing the Taliban from achieving its strategic goals.”

He went on to voice his concern that the measure of the ANDSF’s “capabilities and effectiveness have never been very reliable and are getting worse.”

Concerns over the ANDSF’s capabilities were outlined yet again in a report from the Defense Department’s Inspector General, released on Tuesday, which looked at activities between April 1 and June 30. The report said the “Defense Intelligence Agency (DIA) reported that the ANDSF ‘very likely will struggle’ to defend and hold territory and reverse Taliban advances during the second half of 2021.”

Part of that is no doubt due to dwindling resources. Police outposts in Kandahar, for example, were “barely staffed” by the time the Taliban reached them, the New York Times reported in July, and those who were there had little food, water, and ammunition. “In the last days, there was no food, no water and no weapons,” one Afghan soldier in a district of the northern Kunduz province told the Wall Street Journal.

American military commanders had also previously noted the rapid pace at which the situation was unfolding in Afghanistan. Gen. Austin Miller, the former commander of the U.S.-led mission in Afghanistan, warned in June that civil war in Afghanistan “is certainly a path that can be visualized,” and that they were seeing a “rapid loss of district centers” as the Taliban advanced throughout the country.

Biden’s address on Monday also recognized concerns over the U.S. failure to evacuate vulnerable Afghans before the fall of Kabul — one of the primary criticisms of the administration’s handling of the withdrawal.

For weeks the administration has been asked what their plan was to help vulnerable Afghans and their families who faced overwhelming danger if they were to be left behind in the hands of the Taliban. But on Monday, Biden pointed back to the Afghans as to why the U.S. didn’t move sooner.

“I know there are concerns about why we did not begin evacuating Afghan civilians sooner,” he said. “Part of the answer is some of the Afghans did not want to leave earlier, still hopeful for their country, and part of it is because the Afghan government and its supporters discouraged us from organizing a mass exodus to avoid ‘triggering,’ as they said, a crisis of confidence.”

The claim that Afghans “did not want to leave” is “patently false,” Krish O’Mara Vignarajah, the president and CEO of Lutheran Immigration and Refugee Service who has been working with the administration to resettle Afghans, told Axios.

“We have been in touch with countless SIV [Special Immigrant Visa] recipients who have been desperate to leave Afghanistan for months and have not been able to due to insufficient financial resources and inadequate flight accessibility through international organizations,” Vignarajah said, per Axios.

Alexander McCoy, a Marine Corps veteran and the political director of progressive advocacy organization Common Defense, said that people who “have struggled for years to help our Afghan allies navigate the red tape, massive backlog, and lack of transparency of the Special Immigrant Visa program aren’t buying the idea that Afghans just didn’t want to get to safety.”

Indeed, the backlog of Afghans waiting for their visas to be approved is extensive, to say the least. Roughly 18,000 Afghan allies and 53,000 family members “remained in the processing backlog earlier this year,” according to the Migration Policy Institute, a Washington, D.C., think tank that focuses on immigration policy. The process is so weighed down by bureaucracy and inadequate staffing that a group of Afghan and Iraqi SIV applicants “sued the government for failing to meet the mandated 90-day timeline for case completion,” the Migration Policy Institute said.

And as for Biden’s remark that the Afghan government requested the U.S. not organize “a max exodus,” McCoy said it was “clearly an error in judgment” if the administration “held back from getting the evacuation of vulnerable Afghans underway at the urging of [President Ashraf Ghani].” While Biden “is correct to withdraw US forces,” McCoy said, the decision “to not proactively get vulnerable Afghan allies to safety is a major stain on that legacy.”

“President Biden must do everything in his power to fix this,” he said.