A retired Army general has offered a stinging critique of the current approach in Afghanistan as not being “worth another... 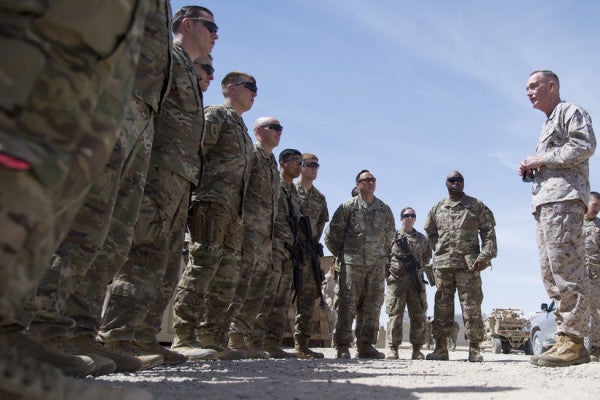 A retired Army general has offered a stinging critique of the current approach in Afghanistan as not being “worth another body bag or hospital bed” in a new op-ed for the Daily Beast.

Gen. Donald Bolduc, the former commander of Special Operations Command-Africa, wrote on Monday that the U.S. had three choices to make in order to resolve the nearly-17-year-old war: Maintain the current approach or return to a comprehensive strategy — neither of which he recommends, pull troops but not abandon the country entirely, or negotiate a truce with the Taliban.

“The bottom line is that despite the dedication and sacrifice of our service members, America’s long war in Afghanistan will not end well,” he wrote. “Despite our senior leaders’ efforts to portray the war as an American victory, the United States is not going to defeat the Taliban, other groups, and ISIS there anytime soon.”

First, Bolduc argues that the year-old “South Asia Strategy” proposed by President Donald Trump will not result in victory or success in Afghanistan. Notably, days before Bolduc's analysis was published, the Taliban launched a major assault on Ghazni, killing scores of Afghan soldiers and police officers. The battle is still ongoing.

Although Bolduc mentions numerous American missteps over the years and cautions that it “does not sit well to depart” Afghanistan, he concludes that “it deserves serious consideration.” That doesn't mean full abandonment, however: While military forces would be reduced, diplomatic and financial assistance for the Afghan government would remain.

Finally, Bolduc mentions the possibility of negotiating a truce with the Taliban, which is fraught with problems. There are irreconcilable differences between the U.S., Afghan governments, and the Taliban leadership first and foremost. Then there is the lack of cohesiveness on the Taliban side, gains made by ISIS, and outside influence.

“We have worn out our Afghan partners and everyone is tired of the war,” he writes. “We have overstayed our welcome with the populace and drawn more violent extremist organizations to Afghanistan. We have not achieved regional security and hold zero leverage over the Taliban to force them to the negotiating table or to implement a viable reintegration program,”

In short, and in Captain Obvious-speak, things aren't looking too good.