Top US Commander In Afghanistan: We Won’t Be Seeing A Military Victory

In the week before President Donald Trump's reported decision to abruptly withdraw 7,000 U.S. service members from Afghanistan, the top... 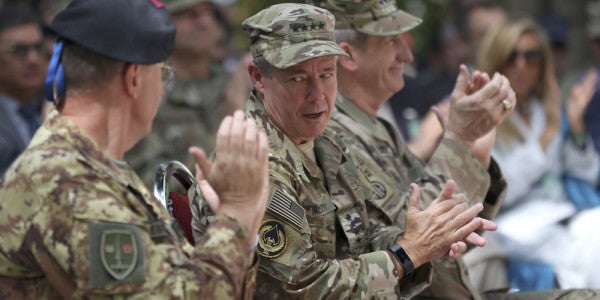 In the week before President Donald Trump's reported decision to abruptly withdraw 7,000 U.S. service members from Afghanistan, the top U.S. commander there all but admitted that the 17-year-old war there will not end with a military victory for the Pentagon.

“This fight will go until a political settlement,” Army Gen. Scott Miller, the commander of U.S. Forces-Afghanistan and the Resolute Support mission there, told CNN when asked whether the Afghan campaign against the Taliban had reached a stalemate. “These are two sides that are fighting against one another, and neither one of them will achieve a military victory at this stage.”

In the same interview, U.S. ambassador to Afghanistan John Bass concurred with Miller's assessment, cautioning that U.S. and Afghan officials will face a complicated diplomatic situation given the Talian's aggressive rejection of the current administration in Kabul.

“We have an opportunity today that we didn't have six or 12 months ago to see if it's truly possible to achieve that political settlement,” Bass told CNN. “We don't know if we're going to be successful. We have to see if the Taliban is interested in responding to the deep desire of the Afghanistan people for peace.”

“This is ultimately about national interests, not just for the United States but its vital national interests,” Gen. Scott Miller, the new top commander of US and coalition forces in Afghanistan, tells CNN’s @KateBolduan about the state of America’s longest war. pic.twitter.com/U4INSryaif

Bass isn't wrong: Kabul’s chief negotiator had met with the U.S. special peace envoy Zalmay Khalilzad in Abu Dhabi on Dec. 18, just days before news of a potential Afghan withdrawal broke. During his own confirmation hearing in June, Miller stated that the “military component” of the Trump administration’s conditions-based strategy is only necessary “to provide space for political progress.”

But with Trump's reported plans to potentially remove all U.S. forces from the country by the presidential election of 2020, the prospect of an especially conciliatory Taliban now seems like a laughable fantasy without a robust, U.S.-backed Afghan security force to keep up the pressure on militants.

Indeed, Miller attempted to build up the performance of the ANDSF in his conversation with CNN. “I like how the Afghan national security forces are performing,” he said. “This is an Afghan fight. Resolute Support provides support, and we enable them, but make no mistake, the Afghans are in the lead.”

That statement came just weeks after the nominee to lead U.S. Central Command, Marine Lt. Gen. Kenneth F. McKenzie Jr, told lawmakers that the ANDSF would essentially collapse in the event of a U.S. military withdrawal.

“Their losses have been very high,” McKenzie told lawmakers at the time. “They’re fighting hard but their losses are not going to be sustainable unless we correct this problem.”

In response to news of the potential withdrawal, the Afghan government said in a terse statement it “will not affect the security situation in any way.”

Just days later, the Taliban killed 43 people at a government compound during a brazen daytime attack in the capital of Kabul.