During a recent visit to Ghazni, the top U.S. commander in Afghanistan carried an M4 Carbine, looking like just another... 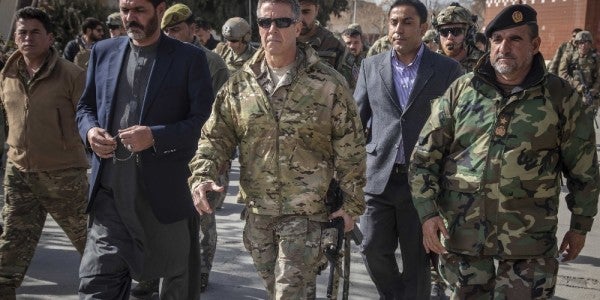 During a recent visit to Ghazni, the top U.S. commander in Afghanistan carried an M4 Carbine, looking like just another 11 Bravo downrange.

Operation Resolute Support tweeted a picture of the general and his weapon on Nov. 22, raising questions about whether security in Afghanistan is so precarious that the top U.S. military commander there needs to have an M4 at the ready at all times.

Indeed, Miller narrowly avoided getting hit in an Oct. 18 inside attack, in which a gunman killed a vitally important Afghan police commander and wounded Army Brig. Gen. Jeffrey Smiley. And other general officers have carried weapons in the past, including Army Gen. Matthew Ridgway, who wore hand grenades on his vest during the Korean War.

But Miller was not carrying the carbine in response to the insider attack, nor was he trying to make a symbolic show of leading from the front, like King Leonidas.

“Gen. Miller was carrying the weapon in Ghazni because he flew there with it,” said Miller’s spokesman, Army Col. David Butler.

Whenever the general flies over hostile territory, carbines and other long weapons are aboard his helicopter in case the aircraft has to set down, Butler told Task & Purpose on Monday.

“Sometimes he has his M4; sometimes he doesn’t, based on the mission, environment and simply the logistics,” Butler said.

When Miller arrived at Ghazni, he didn’t have a place to put the M4, so he and the other passengers carried the weapons from the helicopter, Butler said. Before his meeting, Miller handed the weapon to a U.S. service member.

Butler made clear that he was not attempting to downplay the risk that Miller and all other U.S. troops face. Both Afghanistan in general and Ghazni in particular are dangerous places, but Miller is a soldier and he carries equipment that is appropriate for the mission, the colonel said.

“The next day he went to Farah,” Butler said. “Again, he brought a rifle because of the helicopter flight to get there. This time he was able to pass it off before he met with security officials.”

SEE ALSO: The US General Wounded During The Kandahar Insider Attack Has Been Evacuated To Walter Reed