US general says troop cut in Afghanistan hits 8,600, in line with Taliban deal 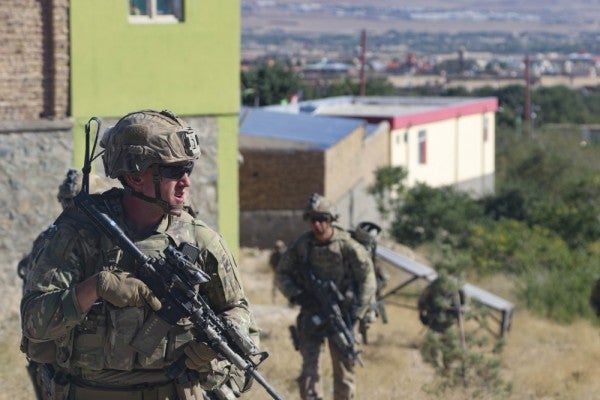 The United States has reduced its troop presence in Afghanistan to levels agreed to as part of a February deal with the Taliban, the general who oversees the region says.

“We agreed to go to the mid-8,000 range within 135 days,” General Kenneth McKenzie, the head of U.S. Central Command, said at an event hosted by the Aspen Institute think tank on June 18. “We're at that number now.”

The February deal provides for the withdrawal of U.S. troops and is intended to pave the way for peace talks between the Taliban and the U.S.-backed government in Kabul.

Under the deal, the United States agreed to reduce its forces in Afghanistan from 12,000 troops to 8,600 by mid-July. If the rest of the deal goes through, all U.S. and other foreign troops will exit Afghanistan by mid-2021.

McKenzie said a full U.S. troop withdrawal was “conditions-based” on the Taliban meeting their commitments.

A key plank of the agreement requires the Taliban to sever all ties with extremist groups such as Al-Qaeda and the Islamic State (IS) that could launch attacks on the United States and its allies.

McKenzie said the Taliban was already at odds with the IS group.

“What we need to see is what they're going to do against Al-Qaeda,” he said, referring to the group responsible for the September 11, 2001 terrorist attacks on the United States. “And we need to see that in deeds and not words.”

The Taliban has “not yet completely made that case,” he said. “There remains an opportunity for them to do it, but time is now beginning to grow short.”

“Relations between the Taliban, especially the Haqqani network, and [Al-Qaeda] remain close, based on friendship, a history of shared struggle, ideological sympathy, and intermarriage,” said the report sent by independent UN sanctions monitors to the UN Security Council.

The report added that the Taliban “regularly consulted” with Al-Qaeda during negotiations with the United States and “offered guarantees that it would honor their historical ties.”

Taliban militants control about half of Afghanistan's territory and have continued to carry out attacks since the U.S.-Taliban deal was signed.

The government has said that in recent weeks some 422 Afghan personnel have been killed or wounded across the country in at least 220 Taliban attacks.

IS militants have also carried a number of high-profile attacks, killing dozens of people.

An attack on May 24 on a maternity hospital in Kabul on May 24 killed was described as “horrific” by Doctors Without Borders, which last week announced it would cease activities at the hospital.

Afghan authorities have put the blame on the Taliban, which has denied involvement, while representatives of foreign governments pointed the finger at Afghanistan's Islamic State affiliate.