The question of whether any U.S. troops were killed as a result of the alleged bounties remains unanswered. 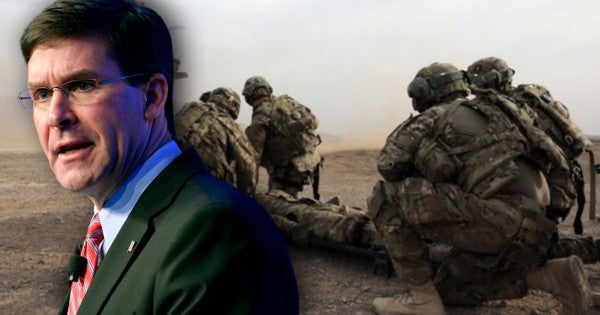 Defense Secretary Mark Esper confirmed to lawmakers on Thursday that he had been briefed on intelligence that the Russians were allegedly offering bounties to Taliban-linked militants to kill U.S. troops in Afghanistan.

“I didn’t see the first report until February, when it came out in an intelligence piece of paper,” Esper told Rep. Seth Moulton (D-Mass.) during Thursday’s House Armed Services Committee hearing.

Both the head of U.S. Central Command and the commander of all U.S. troops in Afghanistan looked into the matter and neither thought the reports about Russian bounties were credible, Esper said.

The question of whether any U.S. troops were killed as a result of the alleged bounties remains unanswered. The intelligence community is investigating whether an April 2019 attack that killed three Marines near Bagram Airfield might be connected to the reported Russian bounty program, according to the Associated Press.

On Thursday, Esper said that Marine Gen. Kenneth McKenzie Jr., head of Central Command, has not found a link between Russian bounties and that specific attack.

Army Gen. Mark Milley, chairman of the Joint Chiefs of Staff, testified that he too had been briefed on the intelligence on the alleged bounties, but as of Thursday, the U.S. military does not have any evidence showing troops in Afghanistan were killed as a result of the Russian payments.

Milley stressed that the military is still investigating the matter.

The testimony from Esper and Milley stands in stark contrast with The White House, which has insisted that President Donald Trump was never briefed on the reports about Russian bounties. The New York Times reported that the intelligence appeared in the president's daily written intelligence briefing in late February.

“Intel just reported to me that they did not find this info credible, and therefore did not report it to me or @VP,” Trump tweeted on June 28. “Possibly another fabricated Russia Hoax, maybe by the Fake News @nytimesbooks, wanting to make Republicans look bad!!!”

White House spokeswoman Kayleigh McEnany has also denied that the president was briefed on the matter.

“Until there's a strategic decision for the President to make, until it is verified, it is not briefed up to the President of the United States,” McEnany told reporters on July 1. “That's how intelligence works.”

Meanwhile, Sen. Tammy Duckworth (D-Ill.) wants Esper to confirm that the Defense Department is investigating whether any of the bounties reportedly offered by the Russians have resulted in the deaths of U.S. troops in Afghanistan.

An Iraq war veteran, Duckworth lost both of her legs when her helicopter was shot down in 2004. She is now reportedly being considered as former Vice President Joe Biden’s running mate in November’s presidential election.

“It is unacceptable that to date, the Trump administration appears to be ignoring a matter of great importance to Gold Star Family members whose loved ones were killed while serving in Afghanistan: were any U.S. troop casualties in Afghanistan connected with the alleged GRU bounty payments to Taliban-linked militants?” Duckworth wrote in a letter to Esper on Thursday.