Thousands of US troops are withdrawing from Afghanistan despite ongoing violence

The Taliban may have already abandoned its pledge to reduce violence in Afghanistan. 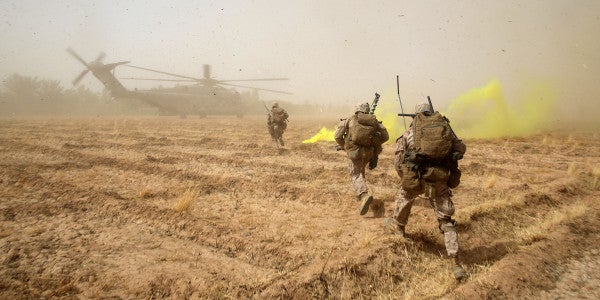 Defense Secretary Mark Esper said he has given permission to begin the drawdown of U.S. troops in Afghanistan  even though the Taliban may have already abandoned its pledge to reduce violence across the country.

Both the United States and the Taliban signed a peace deal on Feb. 29 that calls for all U.S. troops to leave Afghanistan over the next 14 months if the Taliban meet several conditions, including fighting Al Qaeda, ISIS, and other terrorist groups.

“The agreement says that we will reduce down to 8,600 [troops] in 135 days, if I recall correctly, and that drawdown will begin in the first 10 days,” Esper said during a Monday Pentagon news briefing. “My instruction to the commander was: Let’s get moving. Let’s show our full faith and effort to do that.”

Esper said he is not sure if the drawdown is already underway, but Army Gen. Austin Miller, commander of all U.S. troops in Afghanistan, has his approval to “begin at his pace, certainly within 10 days.”

However, a Taliban spokesman told a French news outlet that the reduction in violence was over and the Taliban would resume attacks on Afghan security forces.

“As per the (US-Taliban) agreement, our mujahideen will not attack foreign forces but our operations will continue against the Kabul administration forces,” Zabihullah Mujahid told Agence France-Presse.

Esper told reporters on Monday that he had not seen Mujahid’s announcement about the Taliban attacking Afghan troops and police again.

“Our expectation is that the reduction in violence will continue,” Esper said. “This is going to be a long, windy, bumpy road. There will be ups and downs and we’ll stop and start. That’s going to be the nature of this over the next days, weeks, and months. I’m not going to get too excited about what happens at the moment. We’ve just got to deal with each situation as it arises and make sure we stay focused on the mission.

Gen. Miller issued a statement on Monday saying the U.S. military expects the Taliban to live up to its obligations under the recently signed peace agreement.

“The United States has been very clear about our expectations — the violence must remain low,” Miller said.

It is not immediately clear who was responsible for the attack, Army Gen. Mark Milley, chairman of the Joint Chiefs of Staff, said during Monday’s news briefing.

“The Taliban is not a monolithic group,” said Milley, who has deployed to Afghanistan several times. “There are multiple terrorist organizations operating over there. We don’t know exactly who did that yet.”

Milley also cautioned people not to assume that all attacks in Afghanistan will immediately cease now that the United States and Taliban have reached a peace agreement.