So much for the reduction in violence. 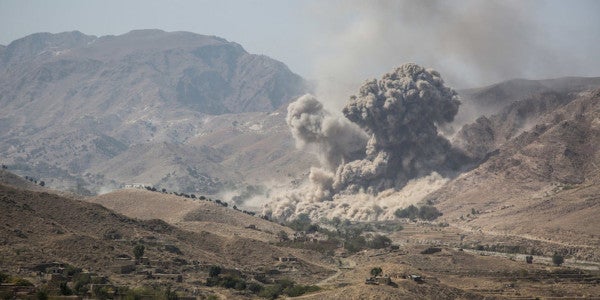 The U.S. military has launched its first airstrike on the Taliban since both sides reached a withdrawal agreement on Feb. 29, the top spokesman for U.S. and coalition forces in Afghanistan tweeted on Wednesday.

“To be clear- we are committed to peace, however we have the responsibility to defend our #ANDSF partners,” Leggett tweeted. “#Afghans & US have complied w/ our agreements; however, Talibs appear intent on squandering this opp. and ignoring the will of the people for #peace. #Showyourcommitment.”

On Monday, a Taliban spokesman announced that it would resume attack on Afghan troops and police, but not U.S. forces.

“Taliban leadership promised the int’l community they would reduce violence and not increase attacks,” Leggett tweeted. “We call on the Taliban to stop needless attacks and uphold their commitments. As we have demonstrated, we will defend our partners when required.”

Under the agreement with the Taliban, the U.S. military will immediately begin drawing down from about 13,000 to roughly 8,600 troops in Afghanistan. All U.S. troops would leave Afghanistan within the next 14 months if the Taliban live up to certain conditions, including fighting terrorist groups.

Despite the 14-month timeline, Defense Secretary Mark Esper has said the withdrawal of U.S. troops from Afghanistan will be conditions-based.

But President Donald Trump has made clear that he wants to withdraw all U.S. troops from Afghanistan as part of his campaign pledge to end America’s so-called “Forever Wars.”

The Taliban claim that during a phone call with its senior leader on Tuesday, the president said that withdrawing all foreign troops from Afghanistan was in both sides’ best interests.

Trump told reporters afterward that he had a “very good talk with the leader of the Taliban.”