Dozens of people have been injured over the weekend. 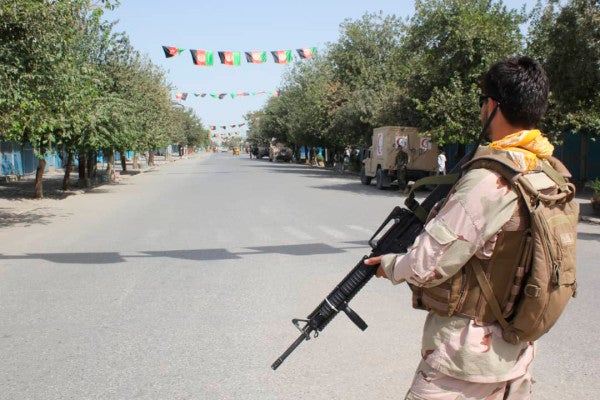 PULI KHUMRI, Afghanistan — At least six people have been killed after the Taliban launched an attack on the northeastern Afghan city of Puli Khumri, as the U.S. special envoy has said negotiators are on the threshold of an agreement to end the country's nearly 18-year conflict.

RFE/RL correspondents in Puli Khumri said late on September 1 that the city was relatively calm after several hours of fighting between security forces and militants.

Local authorities told RFE/RL that the Taliban “suffered a defeat” in Puli Khumri, but they added that sporadic fighting continued in the Kar-Kar and Bandi Du areas on the city outskirts.

The attack on Puli Khumri, the capital of Baghlan Province, came a day after the Taliban briefly stormed the northern city of Kunduz before being pushed back by government troops.

However, the province's public health director, Mohibullah Habib, told the dpa news agency that at least 45 people, including 14 members of the security forces, were wounded in the clashes.

The Associated Press quoted provincial council member Mabobullah Ghafari as saying that he had seen the bodies of at least six members of the security forces.

Ghafari said that the Taliban had occupied some checkpoints with no resistance from security forces. Taliban fighters had taken shelter in some homes, he added. Some residents were trying to flee.

Earlier in the day, U.S. peace envoy Zalmay Khalilzad
had written on Twitter that U.S. and Taliban negotiators were closing in on a deal as they concluded their eighth round of talks in Qatar.

“We are at the threshold of an agreement that will reduce violence and open the door for Afghans to sit together to negotiate an honorable and sustainable peace,” he wrote.

He did not give any specifics of the deal and added that he would be traveling to Kabul later in the day to consult with government officials there.

Khalilzad was visiting Kabul on September 1 to brief the Afghan government.

An unnamed senior Taliban negotiator told Reuters that “we will now discuss these developments with our own leadership, while Zalmay Khalilzad is supposed to go to Kabul and inform the Afghan leadership about the decisions made in the peace talks.”

Suhail Shaheen, a spokesman for the Taliban's political office in Doha, said both sides were in discussions to finalize technical issues after having successfully completed the current round of talks.

“We are on the verge of ending the invasion and reaching a peaceful solution for Afghanistan,” Shaheen said on Twitter on September 1.

The office of Afghan President Ashraf Ghani said Afghan security forces had repelled the attack in some parts of the city, while other officials said that more than 30 militants had been killed.

Taliban spokesman Zabihullah Mujahid in a Twitter post called the attack “large-scale,” while the police spokesman in Kunduz Province reportedly said the attack was “massive” and involved “intense” battles.

The Afghan Interior Ministry said at least 34 Taliban fighters were killed in ground and air operations in three areas of Kunduz city and that clearance operations were under way.

The ministry said on September 1 that at least 25 people, including 20 members of the Afghan security forces, have been killed and at least 85 others have been injured in the fighting.

It said the city is now fully cleared of Taliban presence.

Presidential spokesman Sediq Seddiqi told reporters the attack was “completely against the peace talks” taking place between the United States and the Taliban. Expectations that a breakthrough in the talks might lead to a peace deal, including a timetable for the withdrawal of thousands of U.S. troops, had been on the rise.

Khalilzad on August 31 tweeted that he had “raised the Kunduz attack in talks today, telling the Taliban that violence like this must stop.”

Khalilzad added that General Scott Miller, who commands U.S. forces in Afghanistan, had arrived in Kunduz to assist Afghan forces in defending the city.

U.S. President Donald Trump said on August 30 that the United States had good negotiations going on with the Taliban but had not yet reached a deal.

On August 29, Trump said that the United States will continue to maintain a force in Afghanistan even after a deal was agreed.

The Taliban has long demanded a complete pullout of all foreign forces from the country.

About 20,000 foreign troops, most of them American, are now in Afghanistan as part of a U.S.-led NATO mission to train, assist, and advise Afghan forces. Some U.S. forces carry out counterterrorism operations.