The US is close to a deal with the Taliban, but Secretary of State Mike Pompeo reportedly won’t sign it

The fragile peace negotiations between the United States and Afghan governments and the Taliban may have hit a snag: The U.S. Secretary of State, Mike Pompeo, has reportedly refused to sign on to a draft of the peace deal as it currently stands. 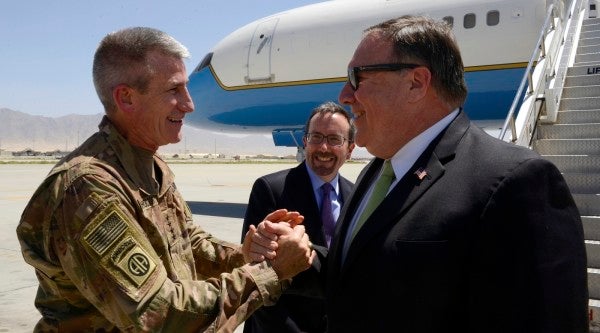 The fragile peace negotiations between the United States, Afghanistan, and the Taliban may have hit a snag: U.S. Secretary of State Mike Pompeo has reportedly refused to sign on to a draft of the peace deal as it currently stands, according to a new report by Time Magazine's Kimberly Dozier.

Under the proposed draft the U.S. would withdraw some 5,000 troops from Afghanistan — with Time reporting that number could be as high as 5,400 — and shutter five bases within 135 days. Additionally, the deal would require the Taliban commit to not allowing Afghanistan to be used as a base from which militant groups, such as the Islamic State or Al Qaeda, could plan attacks on the United States and its allies.

Throughout the negotiations Taliban officials have insisted that all foreign forces must leave the country, which has fueled concerns that if the U.S. were to fully withdraw it would leave the U.S.-backed government of Afghanistan vulnerable, especially with its security forces already stretched thin, mired in allegations of corruption, and suffering staggering losses.

Based on the Time Magazine article, Pompeo's issue with the draft peace accord may center on the following:

The deal doesn't guarantee that the U.S. will be allowed to keep counter terrorism forces in the country to combat Al Qaeda — one of the reasons for America's military presence in the country to begin with; nor does it guarantee “the survival of the pro-U.S. government in Kabul,” or even an end to fighting between the Taliban and pro-government forces, writes Dozier.

“That may explain why Pompeo is declining to put his name on the deal,” according to Dozier, who cited senior American, Afghan, and European officials.

The article goes on to add that Pompeo was asked by the Taliban to sign an agreement with the Islamic Emirate of Afghanistan — the name of the government founded by the Taliban in 1996 until its ouster in 2001 — which would put the secretary of state in the position of officially recognizing the Taliban as a legitimate political entity, rather than an insurgency.

Ironically, the Taliban's push for international recognition of its “Emirate” blew up any chance of peace negotiations back in 2013.

According to Time, Zalmay Khalilzad. the chief U.S. negotiator, could just sign it himself, or the U.S. and Taliban may issue a joint statement supported by the Kabul government and other countries.

When asked for comment by Task & Purpose, the Pentagon directed queries regarding the Time Magazine story to the State Department, which did not respond to request for comment by the time of publication.

The Time report comes after months of negotiations, and after nearly 18 years of combat aimed at stabilizing the country and bolstering security and stability. However, the violence continues.

On Monday, the Taliban claimed credit for a deadly attack in Kabul while Khalilzad, the senior U.S. diplomat to Afghanistan, was visiting with the Afghan President Ashraf Ghani to discuss the proposed peace deal, according to NBC news.

After Operation Enduring Freedom ended in 2014 and the U.S. troop presence there was reduced to roughly 14,000, the mission was renamed Operation Resolute Support. Since then 77 U.S. service members have been killed, 57 due to combat; along with four Department of Defense civilian casualties; and 453 service members have been wounded in action, according to a Department of Defense casualty tracker.