"My fellow Afghans will soon celebrate this historic agreement," Sirajuddin Haqqani wrote in the New York Times. "Once it is entirely fulfilled, Afghans will see the departure of all foreign troops" 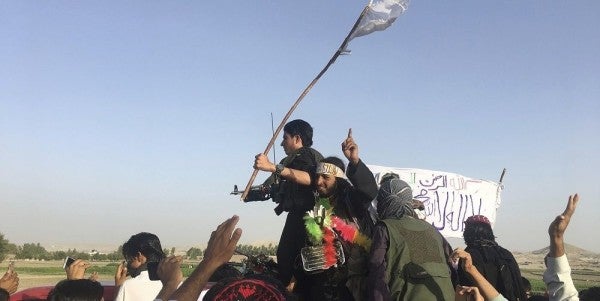 “The withdrawal of foreign forces has been our first and foremost demand,” Sirajuddin Haqqani wrote in a story for the New York Times on Thursday.

A temporary truce between U.S. troops and the Taliban is expected to begin on Feb. 21, an Afghan government official has told Task & Purpose. If the 7-day reduction in violence last, U.S. and Taliban negotiators can work on a final peace agreement.

Kim Dozier of Time first reported that the peace agreement could include secret annexes allowing the U.S. military to keep a residual force in Afghanistan to fight terrorist groups.

But in his article for the New York Times, Haqqani wrote that the Taliban wants the peace deal to call for all U.S. and coalition troops to leave Afghanistan.

“My fellow Afghans will soon celebrate this historic agreement,” Haqqani wrote. “Once it is entirely fulfilled, Afghans will see the departure of all foreign troops.”

Overall, Haqqani's article is meant to assuage concerns in the West that the end of the U.S. military's presence in Afghanistan will allow the country to again become a staging area for terrorist groups.

Haqqani called concerns about terrorists using Afghanistan to launch attacks “inflated” and claimed that reports about the presence of terrorist organizations in Afghanistan are “politically motivated exaggerations by the warmongering players on all sides of the war.”

“It is not in the interest of any Afghan to allow such groups to hijack our country and turn it into a battleground,” Haqqani wrote. “We have already suffered enough from foreign interventions. We will take all measures in partnership with other Afghans to make sure the new Afghanistan is a bastion of stability and that nobody feels threatened on our soil.”

However, the Taliban have yet to show that they have broken with Al Qaeda. In fact, the FBI has designated Haqqani as a global terrorist who has links to Al Qaeda.

He is wanted for questioning for a January 2008 attack in Kabul that killed six people, including an American citizen, and he is believed to have coordinated attacks against U.S. and coalition troops in Afghanistan, according to the FBI. Haqqani was also allegedly involved in a plot to kill Afghanistan's president in 2008.

The New York Times' senior correspondent in Afghanistan questioned his newspaper's decision to run a story from Haqqani.

“The piece by Siraj Haqqani in @nytopinion – which's independent of our news operations & judgment – omits the most fundamental fact: that Siraj is no Taliban peace-maker as he paints himself, that he's behind some of most ruthless attacks of this war with many civilian lives lost,” Mujib Mashal tweeted on Thursday.