The New York Times failed to inform its readers that Sirajuddin Haqqani is a wanted terrorist with a $5 million reward for information leading to his arrest. 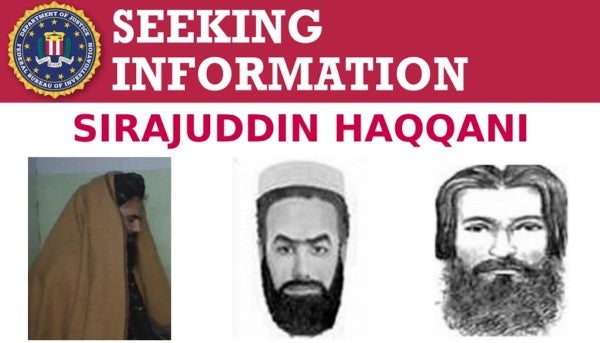 Sirajuddin Haqqani is an infamous terrorist, a Taliban leader with the blood of Americans on his hands. Now he’s a contributor to the New York Times.

The newspaper’s opinion section recently ran an article penned by Haqqani with the headline: “What We, the Taliban, Want.” (Turns out the story is not connected to the 2000 film “What Women Want” with Helen Hunt, Marisa Tomei, and pre-meltdown Mel Gibson).

Haqqani leads the Haqqani Network, which has ties to Al Qaeda and Pakistan’s intelligence service. He has also served as the Taliban’s No. 2 commander since 2015, directing the group’s military operations, according to the Council on Foreign Relations.

In his opinion article, Haqqani argues the Taliban is tired of war, but any final peace agreement with the United States must include the full withdrawal of all U.S. and foreign troops from Afghanistan. (The Taliban and United States are set to sign an interim peace deal on Feb. 29 that would allow the Taliban to begin negotiating a political settlement with the Afghan government.)

Your friend and humble narrator admits that he was taken aback quite a bit to see Haqqani’s byline in the New York Times. Then again, the newspaper’s opinion section ran a 2017 story from Blackwater founder Erik Prince in which he argued that security contractors should take over the majority of military operations in Afghanistan. (Prince’s story generated a plethora of parody headlines for New York Times opinion section stories including “We Should Let Godzilla Destroy Our Cities” written by Godzilla.)

Granted, the New York Times has run some questionable opinion stories. But does giving Haqqani a platform show an astounding level of indifference to the suffering that the Taliban and Al Qaeda have caused?

The Haqqani Network not only has deep ties to Al Qaeda but the Haqqanis themselves have played a major role in shaping Al Qaeda and the network is the most hardline Taliban faction, said Michael Kugelman, an Afghanistan expert at the Woodrow Wilson International Center for Scholars in Washington, D.C.

“It's no surprise, then, that the Haqqani network is formally designated by the U.S. government as a terror group, even though the broader Afghan Taliban is not,” Kugelman told Task & Purpose. “So in effect, the Times has published an op ed by a top leader of a Taliban faction that is deeply intertwined with Al Qaeda – and that has been implicated in a series of deadly attacks on US forces in Afghanistan over a period of many years.”

The New York Times is keenly aware how dangerous the Taliban is, a newspaper spokesperson told Task & Purpose. After all, the group has kidnapped several New York Times journalists over the past 20 years,

“But, our mission at Times Opinion is to tackle big ideas from a range of newsworthy viewpoints,” the spokesperson said in a statement. “We’ve actively solicited voices from all sides of the Afghanistan conflict, the government, the Taliban and from citizens. Sirajuddin Haqqani is the second in command of the Taliban at a time when its negotiators are hammering out an agreement with American officials in Doha that could result in American troops leaving Afghanistan. That makes his perspective relevant at this particular moment.”

Even if Haqqani is a newsworthy figure, though, it is not clear at all that he has shown that he can be trusted when he argues the Taliban have no interest in letting Al Qaeda and other terrorist groups use Afghanistan as headquarters.

“It is not in the interest of any Afghan to allow such groups to hijack our country and turn it into a battleground,” Haqqani wrote. “We have already suffered enough from foreign interventions. We will take all measures in partnership with other Afghans to make sure the new Afghanistan is a bastion of stability and that nobody feels threatened on our soil.”

To your skeptical friend and humble narrator, it’s hard to imagine that Haqqani was able to keep a straight face while writing that. (He also had the balls to claim the Taliban was interested in creating a society “where the rights of women… are granted by Islam.”)

Retired Army Gen. David Petraeus, who led U.S. and allied troops in Afghanistan, said he also doubts Haqqani has the credibility to claim the Taliban will fight terrorists once all U.S. troops withdraw.

“I have considerable doubts about that assertion (noting that it comes from the leader of a terrorist group that has carried out innumerable truly barbaric attacks on Afghan civilians and Afghan and Coalition Forces),” Petraeus told Task & Purpose.

This reporter is not the smartest or the most experienced journalist in the world, so please take this conclusion with an ocean’s worth of salt: While Haqqani’s point of view is relevant to the ongoing peace process in Afghanistan, the New York Times story was shockingly devoid of context.

Besides including a related link to a 2016 story about the Haqqani Network, the New York Times failed to inform its readers that Haqqani is a wanted terrorist with a $5 million reward for information leading to his arrest.

Even the New York Times’ senior Afghanistan correspondent Mujib Mashal tweeted that the story left out the fact that Haqqani is “behind some of most ruthless attacks of this war with many civilian lives lost.”

While the U.S. government has knowingly misled the American public about progress in Afghanistan for years, that doesn’t mean Haqqani should have an opportunity to sling bullshit too.