Trump did not say when he would meet with Taliban leaders. 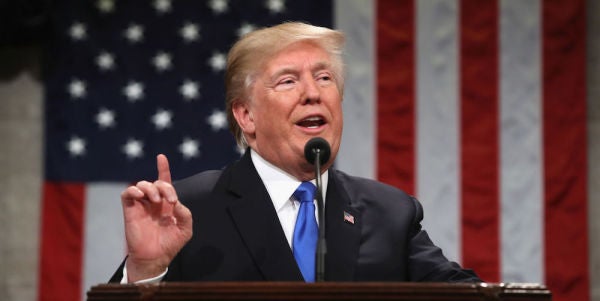 President Donald Trump announced on Saturday that he will meet with Taliban leaders soon, but he did not say exactly when.

“I’ll be meeting personally with Taliban leaders in the not-too-distant future,” Trump said at the White House after U.S. and Taliban negotiators signed a peace deal in Qatar. “We will be very much hoping that they will be doing what they say they are going to be doing. They will be killing terrorists.”

The peace agreement calls for all U.S. troops to leave Afghanistan over the next 14 months if the Taliban meets certain conditions, such as fighting terrorist groups including Al Qaeda and ISIS.

The president had planned to meet Taliban leaders at Camp David in September, but he cancelled the meeting after the Taliban took responsibility for an attack that killed Army Sgt. 1st Class Elis A. Barreto Ortiz, of the 3rd Brigade Combat Team, 82nd Airborne Division.

Trump dismissed criticism of the peace deal from his former national security advisor, John Bolton, who tweeted that the agreement “an Obama-style deal” that legitimizes the Taliban and sends the wrong message to terrorists.

“Nobody should be criticizing this deal after 19 years,” the president said in response to Bolton’s tweet. “He had his chance. He didn’t do it.”

The deal with the Taliban allows the U.S. military to begin drawing down from about 13,000 troops in Afghanistan to roughly 8,600.

When Trump was asked when U.S. troops would start coming home from Afghanistan, he replied: “Today. They’ll start immediately.”