Trump blasted Mattis and other top Pentagon leaders as ‘dopes and babies’ in an intense meeting, new book claims

President Donald Trump called then-Defense Secretary James Mattis and other top Pentagon leaders "dopes and babies" during an intense 2017 meeting, according to a new book about the president 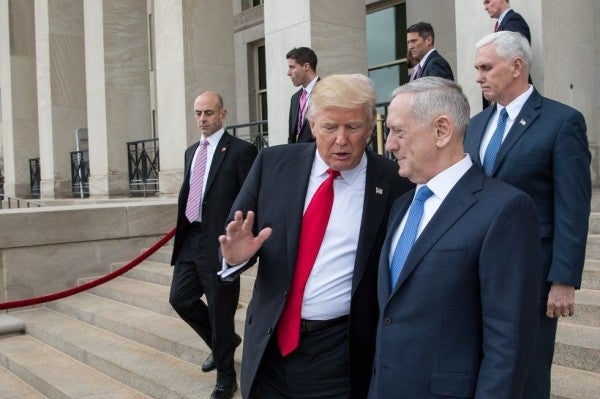 President Donald Trump called then-Defense Secretary James Mattis and other top Pentagon leaders “dopes and babies” during an intense 2017 meeting, according to a new book about the president.

The incident happened in July 2017 when Trump arrived at the Pentagon for an expansive briefing on the post-World War II international order, according to Washington Post reporters Philip Rucker and Carol Leonnig in their upcoming book A Very Stable Genius: Donald J. Trump's Testing of America.

Mattis' attempts to educate the president about the importance of America's current military alliances went terribly wrong, according to the book: Trump complained that the United States should charge South Korea “rent” to base troops there, called NATO worthless, vowed to get out of the 2015 nuclear deal with Iran, and became enraged that the U.S. military had failed to declare victory in Afghanistan.

Finally, Trump exploded by lashing out at everyone at the briefing. “I wouldn't go to war with you people. You're a bunch of dopes and babies.”

Ever the Marine, Mattis did not respond to Trump's tirade, the two authors report. Instead, then-Secretary of State Rex Tillerson spoke up, telling the president: “You're totally wrong. None of that is true.”

Tillerson's relationship with the president was permanently damaged by that meeting, according to the book. Trump eventually fired him in March 2018.

Mattis declined to comment when reached by Task & Purpose on Friday. He has repeatedly said that he will not criticize Trump while the president is still in office.

Rucker and Leonnig are not the first authors to document the now-infamous briefing at the Pentagon. Mattis' former speechwriter Guy Snodgrass recounted in his book Holding the Line: Inside Trump's Pentagon With Secretary Mattis that the president also discussed holding a military parade and complained that the aircraft carrier USS Gerald R. Ford was “completely out of control with cost overruns.”

The key takeaway from the episode was that briefers needed to capture the president's attention and keep it, Snodgrass wrote in the book.

“I learned an important lesson that would pay off when President Trump returned for a briefing the following January: only use slides with pictures . . . no words,” Snodgrass wrote.