The White House released the most painfully obvious statement about President Donald Trump visiting the Pentagon on Friday. 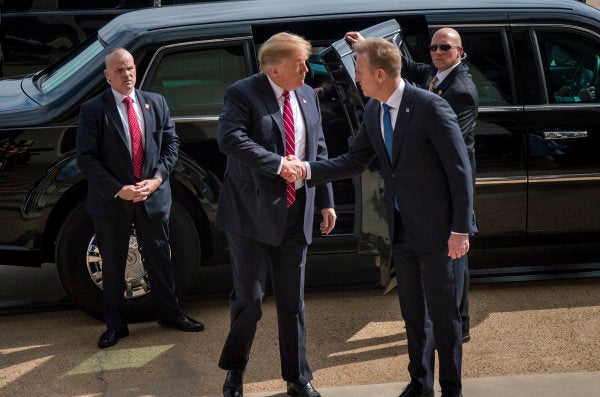 The White House released the most painfully obvious statement about President Donald Trump visiting the Pentagon on Friday.

According to White House spokesman Hogan Gidley, per the pool report, “Today at the Pentagon, the President received a briefing conducted by military officials and members of his national security team.”

What was he briefed on? Could you throw in a topic or two? And you're telling me military officials and his national security team were present at the Pentagon? No way.

This normally wouldn't be worth complaining about if there were press availability at this thing, where reporters could ask some questions and report on things that Americans may find of interest in the entire affair, but alas, it was closed to press. So as one Task & Purpose reporter noted in our internal chat, the “brain-numbingly obvious” statement made it clear that, “today, where defense things happen, discussions about defense did in fact take place.”

Task & Purpose asked whether there was more to come from Gidley, and will update if there is any response. We're hoping to hear a little bit more detail, such as news that the president shook a colonel's hand, or that perhaps he at one point drank from the water fountain.

We can now add this non-statement statement from the White House to the transparency greatest hits album for taxpayer-funded press operations. Also in the archive is a transcript from a “Press Gaggle by Acting Secretary Shanahan” from earlier this week which featured Shanahan saying he had to get back, asking a reporter how they were doing, and then saying pretty much nothing after that.

This of course follows the last official Pentagon press briefing from the podium, which was given by actor Gerard Butler. I wish I were making that up. And for those keeping score, the last time the top Pentagon spokesperson — you know, the person whose job it is to explain to the American people what the Defense Department is doing on a daily basis — has given a briefing on camera was almost a year ago.

SEE ALSO: Actor Gerard Butler Has Given More Pentagon Briefings In The Past 5 Months Than The DoD's Spokeswoman