The Pentagon reportedly has a plan to send 5,000 more troops to the Middle East to counter Iran

Are those war drums we hear? 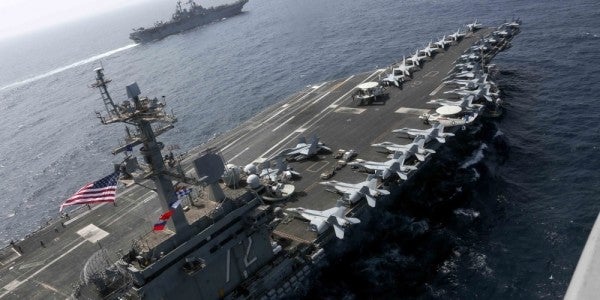 So far, no decisions have been made about whether to send the reinforcements to the region, unnamed U.S. officials told CNN's Barbara Starr.

“The military capabilities being discussed include sending additional ballistic missile defense systems, Tomahawk cruise missiles on submarines, and surface ships with land attack capabilities for striking at a long range,” CNN reports. “Specific weapons systems and units have not been identified.”

Reuters reporters Idrees Ali and Phil Stewart were first to report the number of troops that U.S. Central Command has requested be sent to the Middle East. Associated Press reporter Lolita Baldor later reported the Pentagon will present the White House with a plan to send 10,000 additional troops to the region.

The U.S. military greeted Tuesday's media reports with a wall of official silence.

“As a matter of long-standing policy, we are not going to discuss or speculate on potential future plans and requests for forces,” said Pentagon spokeswoman Navy Cmdr. Rebecca Rebarich.

Earlier this month, the Pentagon approved a request from the head of U.S. Central Command to move the aircraft carrier USS Abraham Lincoln and its strike group, the amphibious transport dock USS Arlington, B-52 bombers, and a Patriot missile battery to the Middle East in response to intelligence that Iran and its proxies could be preparing to attack U.S. forces in the region.

The Air Force also has F-15E Strike Eagles in theater along with F-35As, which arrived in April at Al Dhafra Air Base, United Arab Emirates for an exercise. Two weeks later, Air Force F-35s flew their first combat mission by blowing up a cave in Iraq.

“The most important thing we can do as the department is avoid miscalculation, and then control escalation,” Acting Defense Secretary Patrick Shanahan told reporters on Tuesday. “Our posture is for deterrence. I just hope Iran is listening. We're in the region to address many things, but it is not to go to a war with Iran.”

But some Democratic lawmakers have voiced concern that the United States may be headed toward a war with Iran.

Rep. Seth Moulton (D-Mass) told Task & Purpose after being briefed by Shanahan and Secretary of State Mike Pompeo on Tuesday that he was even more concerned that the Trump administration was looking for an excuse to get into a fight with Iran.

“Everything I have said to date about how concerned I am with this administration's push toward war – the fact that there are certain people in the administration who are pushing for regime change in Iran – was reinforced by this briefing,” said Moulton, who is trying to win the Democratic Party's nomination for president in the 2020 election.

UPDATE: This story was updated on May 22 with the number of troops that may be deployed to the Middle East.

SEE ALSO: For Democrats In Congress Who Fought In The Iraq War, Iran Is Déjà Vu All Over Again

WATCH NEXT: Trump: North Korea 'Will Be Met With Fire And Fury'