Trump to send 1,500 troops to the Middle East amid tensions with Iran

President Donald Trump said on Friday he will send about 1,500 American troops to the Middle East, mostly as a protective measure, amid heightened tensions with Iran. 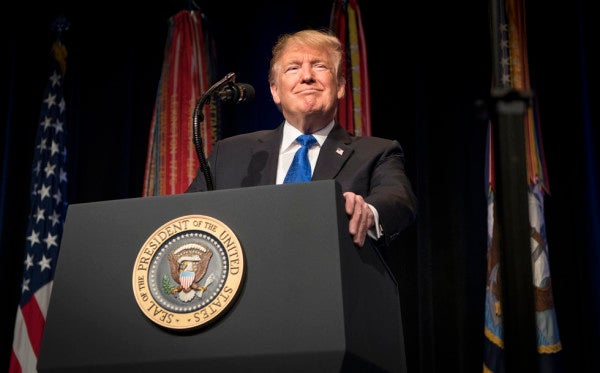 WASHINGTON (Reuters) – U.S. President Donald Trump said on Friday he will send about 1,500 American troops to the Middle East, mostly as a protective measure, amid heightened tensions with Iran.

However, the Republican leader played down the potential for military conflict in the region, saying he believed Iran did not want a confrontation with the United States.

“We want to have protection in the Middle East. We're going to be sending a relatively small number of troops, mostly protective,” Trump said as he left the White House for a trip to Japan.

The Pentagon said only about 900 of the 1,500 troops will be newly deploying and that 600 are already in the region and will be extended. It said they include Patriot missile battery personnel, manning for surveillance aircraft and engineers.

“Right now, I don't think Iran wants to fight. And I certainly don't think they want to fight with us,” Trump said.

The U.S. military deployed a carrier strike group, bombers and Patriot missiles to the Middle East earlier this month in response to what Washington said were troubling indications of possible preparations for an attack by Iran.

Rhetoric between Tehran and Washington has escalated in recent weeks as the United States tightened sanctions with what it said was the goal of pushing Iran to make concessions beyond the terms of its 2015 nuclear deal.

Trump withdrew from the 2015 nuclear deal between Iran and six major powers a year ago and now is seeking to block all Iranian oil exports.

Washington believes a series of recent attacks in the region may have been inspired by Iran, including a rocket attack in Baghdad's heavily fortified Green Zone and what Saudi Arabia described as armed drone attacks on two oil pumping stations and the sabotage of four vessels including two Saudi oil tankers.

Trump warned on Monday that Iran would be met with “great force” if it attacked U.S. interests in the Middle East.

SEE ALSO: Lawmakers Are Taking Another Stab At Repealing The Post-9/11 AUMF Amid Tensions With Iran

~popular_source-pageview
iran so far away
news