Pentagon: We won’t reveal proof Iran is behind recent Middle East attacks, but have we ever been wrong before?

"I'm not reverse engineering this. The Iranians have said publicly they were going to do things. We learned more through intelligence reporting. They have acted upon those threats and they've actually attacked." 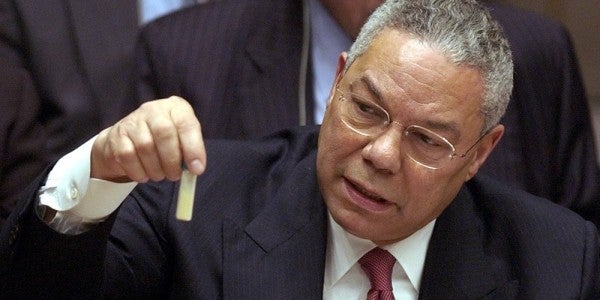 The Pentagon is producing precisely diddly-squat in terms of proof that Iran is behind recent attacks in the Middle East, requiring more U.S. troops be sent to the region.

Adm. Michael Gilday, director of the Joint Staff, said on Friday that the U.S. military is extending the deployment of about 600 troops with four Patriot missile batteries already in the region and sending close to 1,000 other service members to the Middle East in response to an Iranian “campaign” against U.S. forces.

The recent sabotage of four tankers near the Strait of Hormuz, attacks against Saudi oil pipeline and pumping facilities, and a May 19 rocket attack against Baghdad's Green Zone – which has been denounced by Iraqi Shiite militia – all can be traced back to “the leadership of Iran at the highest level,” Gilday told reporters at a Pentagon news conference.

“Even more troubling: We have had multiple credible reports that Iranian proxy groups intend to attack U.S. personnel in the Middle East,” Gilday said.

But when Task & Purpose asked Gilday what evidence he could provide showing that Iran has been behind recent attacks, the admiral replied: “Through intelligence sources that we have.”

Gilday argued he could not reveal how he knows these things, but insisted that the Pentagon could say “with very high confidence” that the Iranian regime is linked to the Green Zone, tanker, and Saudi attacks.

Further pressed to provide proof to back up his case, Gilday replied: “I'm not reverse engineering this. The Iranians have said publicly they were going to do things. We learned more through intelligence reporting. They have acted upon those threats and they've actually attacked.”

For the time being, however, the Pentagon is asking Americans to take them at their word in lieu of concrete proof.

SEE ALSO: Trump: US Will Respond With 'Great Force' If Iran Attacks

WATCH NEXT: Iran's New Fighter Is An Omen Of Things To Come