"The coalition that we're building in the Arabian Gulf and specifically in the Strait of Hormuz is going to be a 80- or 90-percent coalition effort. A much smaller U.S. effort is primarily focused on providing intelligence support to the rest of the coalition." 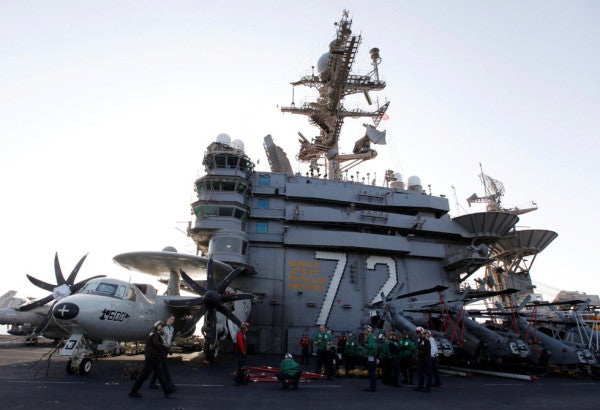 The Navy wants to assure you that is not dispatching an entire fleet to the Strait of Hormuz a part of efforts to escort American commercial ships and has no plans on initiating a sequel to World War II's Battle of the Atlantic with its Iranian adversaries.

“We will escort our ships as they come along, but we won't be there in great numbers, Vice Adm. Michael Gilday testified on Wednesday during his Senate confirmation hearing to become chief of naval operations. “The idea is for the regional partners to bear the lion's share of the burden.”

In response to Iranian provocations against commercial shipping vessels in the region over the last several months, the U.S. military is working with partners in the Middle East to guarantee freedom of navigation in the Persian Gulf, Strait of Hormuz, Bab el-Mandeb Strait, and the Gulf of Oman.

Defense Secretary Mark Esper had previously told reporters on July 24 that the U.S. military “will be available” to escort U.S. merchant ships in the Strait of Hormuz.

“In some cases, that may be strictly an overhead capability,” Esper said at a media availability. “It may mean that there is a U.S. Naval warship within proximity to deter that. I don't necessarily mean that's every U.S.-flagged ship going through the strait has a destroyer right behind it.”

On Wednesday, Gilday said that not many U.S.-flagged or U.S.-owned ships transit the Strait of Hormuz.

“The coalition that we're building in the Arabian Gulf and specifically in the Strait of Hormuz is going to be a 80- or 90-percent coalition effort,” Gilday said. “A much smaller U.S. effort is primarily focused on providing intelligence support to the rest of the coalition.”

Since May, the Pentagon has sent additional ships, aircraft, and troops to the Middle East in response to intelligence that Iran had launched a coordinated campaign against U.S. forces and allies in the region.

The U.S. military has “taken great care not to be provocative against Iran” in light of attacks on foreign ships and the shooting down of U.S. drones by Iran and its proxies, Gilday said.

The additional U.S. forces that have been sent to the Middle East are meant to help de-escalate tensions with Iran so the State Department can succeed in bringing Iran back to negotiations about its nuclear program, he said.

If confirmed by the Senate, Gilday would replace Adm. John Richardson, who is expected to retire in September after serving as CNO for four tumultuous years that have included two deadly ship collisions, U.S. sailors captured by Iran, the continuing fallout of the Fat Leonard Scandal, and a growing number of scandals in the Navy's special warfare community, including a SEAL platoon being sent home from Iraq amid investigations into drinking and an alleged sexual assault.

Sen. Gary Peters (D-Mich.) asked Gilday how he would help Naval Special Warfare Command fix “what appears to be a troubling culture that may need attention.”

Gilday said ethics are extremely important to him and it is important for sailors to live up to the Navy's values, especially in combat.

“I commit, senator, to getting a better understanding of those issues; to holding people accountable, if and where they need to be held accountable; to getting after the root causes and ensure if there is a problem with the culture or the community that that is addressed very quickly and very firmly,” Gilday said.