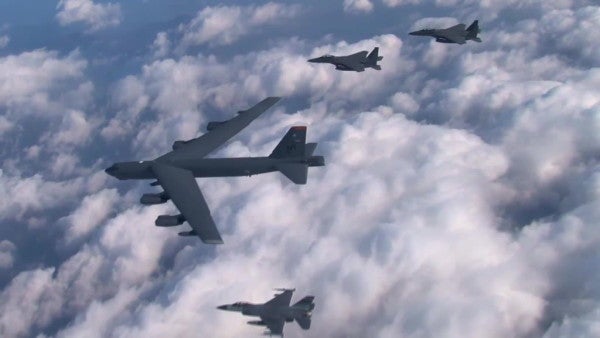 In September the U.S. military dropped 948 munitions in Afghanistan, according to U.S. Air Forces Central Command's latest summary of wartime missions. The last time so much ordnance was used in Afghanistan was October 2010, when the coalition tracked 1,043 weapons releases.

Both President Donald Trump and Defense Secretary Mark Esper have said the U.S. military has escalated attacks against the Taliban following the breakdown of peace talks in early September.

“We did pick up the pace considerably,” Esper told reporters on Oct. 4 while returning from a visit to Wright Patterson Air Force Base, Ohio, and Louisville, Kentucky. “The president did want us to pick up response. You had the heinous attacks that the Taliban and others conducted throughout Afghanistan.”

The number of weapons used during airstrikes in Afghanistan has been climbing since the summer, according to U.S. Air Forces Central Command's latest summary of wartime missions. In June, 441 weapons were used, followed by 613 in July and 783 in August.

U.S military aircraft have flown 1,838 sorties involving using at least one weapon so far this year, a major jump from 500 such missions flown in 2018, the summary shows.

Overall, the coalition flew 6,547 sorties in the first nine months of 2019, nearly as many as the 8,196 sorties flown during all of last year.

The U.S.-led war in Afghanistan marked its 18th anniversary on Monday. After a small number of U.S. troops and intelligence officers helped the Northern Alliance topple the Taliban in 2001, the U.S. military shifted its focus to Iraq. By 2006, signs were emerging that the Taliban was rising again.

Trump, who has vowed to end the United States' post 9/11 wars, tweeted on Sept. 7 that he had invited the Taliban to Camp David for peace negotiations, but he had decided to end the process because the Taliban were continuing to carry out attacks.

“Unfortunately, in order to build false leverage, they admitted to an attack in Kabul that killed one of our great great soldiers, and 11 other people,” Trump tweeted. “I immediately cancelled the meeting and called off peace negotiations. What kind of people would kill so many in order to seemingly strengthen their bargaining position?”