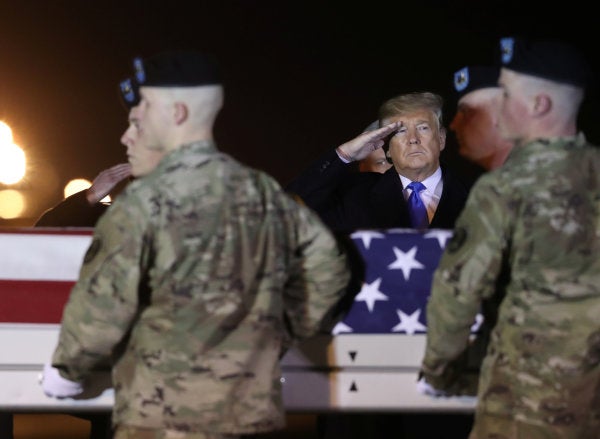 DOVER AIR FORCE BASE, Del. (Reuters) – President Donald Trump traveled to Dover Air Force Base in Delaware on Thursday to receive the remains of two American soldiers killed in a helicopter crash in Afghanistan this week.

Trump, who met with families of the soldiers, was accompanied at the base by first lady Melania Trump, Chairman of the Joint Chiefs of Staff Mark Milley and national security adviser Robert O'Brien.

The president and the other officials looked on as six military personnel in army fatigues, white gloves and black berets lifted the flag-draped transfer cases onto a van.

The U.S. military said the cause of the Wednesday crash in Logar province south of the capital, Kabul, was still under investigation but preliminary reports did not indicate it was caused by enemy fire. The Afghan Taliban claimed responsibility for downing the helicopter.

The crash came after the Taliban swapped two Western hostages for three of its commanders held by the Afghan government, raising hopes of a thaw in relations between the militant group and coalition forces.

In September, Trump canceled peace talks with Taliban leaders aimed at ending their 18-year war after the group claimed responsibility for an attack in Kabul that killed an American soldier and 11 other people.

The surprise move left in doubt the future of a draft accord that offered a drawdown of thousands of U.S. troops in exchange for guarantees Afghanistan would not be used as a base for militant attacks on the United States and its allies.

Actor Jon Voight, a Trump supporter who received a National Medal of the Arts from the president at the White House earlier on Thursday, accompanied Trump on the visit to the Dover base.