"We have filed the paperwork to restore Major Golsteyn's Special Forces Tab to him that was unjustly taken in 2014 and to issue is previously approved and signed Distinguished Service Cross," his attorney told Task & Purpose. 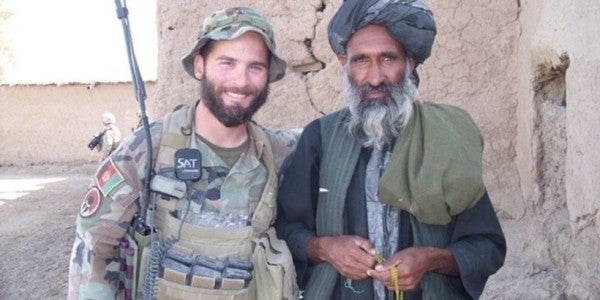 Maj. Matthew Golstyen has formally asked the Army to restore his Distinguished Service Cross, which he was awarded but never received, said his attorney Phillip Stackhouse.

Golsteyn had been charged with murder after repeatedly admitting that he had killed an unarmed Afghan man in 2010, whom he believed was a Taliban bomb-maker. President Donald Trump issued Golsteyn a full pardon on Nov. 15 before his case could go to trial.

“We have filed the paperwork to restore Major Golsteyn's Special Forces Tab to him that was unjustly taken in 2014 and to issue his previously approved and signed Distinguished Service Cross,” Stackhouse told Task & Purpose in an email.

Then-Army Secretary John McHugh approved that Golsteyn's Silver Star be upgraded to the Distinguished Service Cross in October 2011, but Golsteyn did not receive the award while he was being investigated for murder, Stackhouse said.

McHugh then decided in October 2014 that Golsteyn would not receive the Distinguished Service Cross, Stackhouse said.

Stackhouse relayed comments from Golsteyn, who said Trump told him “everything would be expunged” and he would be entitled to “everything, you are just as if this never happened” when the president pardoned him.

“Based upon the 'pretrial' pardon and what specifically the president told Matt, [Army Secretary Ryan McCarthy] should overturn McHugh's 10/2014 decision to overrule the senior army decorations board 9/2014 decision that opined Matt should still be presented the approved award,” Stackhouse said in an email.

An Army spokesman had little to say about Golsteyn's request that his Distinguished Service Cross and Special Forces tab be restored.