"The President hasn't made it clear why he acted as he did. It can't be that combat is simply too hard for the common man," said retired Gen. Martin Dempsey, former Chairman of the Joint Chiefs of Staff 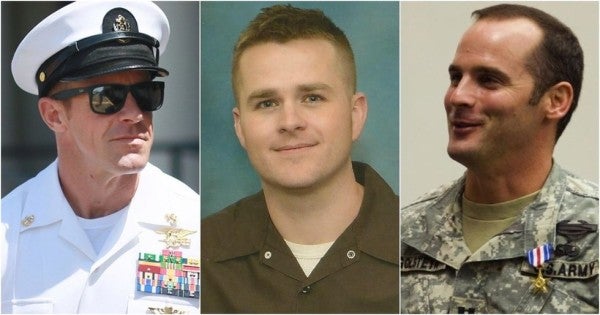 On Friday, President Donald Trump intervened in the cases of three U.S. service members accused of war crimes, granting pardons to two Army soldiers accused of murder in Afghanistan and restoring the rank of a Navy SEAL found guilty of wrongdoing in Iraq.

While the statements coming out of the Pentagon regarding Trump's actions have been understandably measured, comments from former military leaders and other knowledgable veterans help paint a picture as to why the president's Friday actions are so controversial.

The Army, Navy, and Pentagon all took similar approaches in their official responses to the commander-in-chief's orders: The President of the United States has the power to do this under the Constitution, and we will follow his orders.

The Army's statement — which was not attributed to any senior official — stated simply that the service would implement pardons of Maj. Matthew Golsteyn and 1st Lt. Clint Lorance.

“The Army has full confidence in our system of justice. The Uniform Code of Military Justice ensures good order and discipline for uniformed service members while holding accountable those who violate its provisions,” the statement reads. “The foundation of military law is the Constitution, and the Constitution establishes the President's power to grand pardons.”

Navy Rear Adm. Charlie Brown, the Navy's Chief of Information, tweeted that as Commander in Chief, “the President has the authority to restore Special Warfare Operator First Class [Eddie] Gallagher to the pay grade of E-7. We acknowledge his order and are implementing it.”

But a U.S. defense official also told CNN that there's concern among the department's leadership that Trump's pardons could undermine the military's justice system. CNN and the New York Times also reported that senior Pentagon leadership, including Defense Secretary Mark Esper, urged Trump not to intervene in the three cases.

“As President Trump intervenes in war crimes cases on behalf of individuals accused or convicted of war crimes, he … undermines decades of precedent in American military justice that has contributed to making our country's fighting forces the envy of the world,” Gen. Charles Krulak, former commandant of the Marine Corps, said in a statement.

“Disregard for the law undermines our national security by reducing combat effectiveness, increasing the risks to our troops, hindering cooperation with allies, alienating populations whose support the United States needs in the struggle against terrorism, and providing a propaganda tool for extremists who wish to do us harm,” he added.

Presidential pardons: @realDonaldTrump should not override his SECDEF / service chiefs / UCMJ. We don’t train “killing machines” We need “thinking machines” who make the hard ethical choices in battle like LT Michael Murphy did. Read “Lone Survivor” his story about a true hero

While retired Gen. Martin Dempsey, former Chairman of the Joint Chiefs of Staff, was previously critical of the prospect of Trump's war crimes pardons back in May, he said in a Friday statement that he doesn't know if Trump's intervention truly sends a negative message to current U.S. troops.

“The President has the authority to pardon and provide clemency, but as far as I can tell he hasn't shared his rationale for this particular action,” Dempsey said in a statement. “Our military leaders continue to train their men and women on the importance of legal and ethical conduct both in peace and in war. I'm confident those same leaders will hold soldiers, sailors, airmen, and marines accountable. What happens after that is out of their control.”

When reached for additional comment by Task & Purpose, Dempsey added that the message Trump's pardons send to allies, partners and adversaries “is another question.”

“Again, the President hasn't made it clear why he acted as he did. It can't be that combat is simply too hard for the common man,” he added. “Our servicemen and women have demonstrated with very few exceptions that they can act with uncommon honor and valor.”

While Dempsey was measured in his assessment, former military lawyers took a more dire view of the precedent set by the commander-in-chief's sudden pardons.

“It's just institutionally harmful,” Rachel VanLandingham, a former Air Force JAG and professor of law at Southwestern Law School, told the New York Times. “This isn't about these three individuals, it's about the whole military justice system and whether that system itself is something of value to the operations of the military.”

“Trump's pardons put our soldiers in harm's way,” Glenn Kirschner, a former Army JAG and NBC/MSNBC legal analyst, wrote on Twitter. “Other countries will assume our soldiers are permitted by the president to commit war crimes w/impunity. It also disregards the victims & insults all law-abiding US troops.

“Mr. Trump's intervention on behalf of those convicted or accused of conduct falling short of the military's crucial legal requirements and moral expectations undermines the training in which the military rightly invests so much effort,” Benjamin Haas, combat veteran and former Army intelligence officer, wrote in the New York Times. “It trivializes the values the military spends so much time fostering.”

“I can honestly say I have not talked to a single military officer who would be in favor of pardoning any one of these three,” Gary Solis, a combat veteran and former military attorney who now teaches the laws of war at the Georgetown University Law Center and the George Washington University Law School, told Military.com. “[Trump[ had a war crime and [Lorance] was convicted, his appeal was rejected and he was serving his time. And the president stepped in and set him free, in essence ratifying his actions.”

“Now, those enlisted kids, those Marines, soldiers, SEALs who see a war crime committed are going to think twice about reporting it,” Solis added. “You are always going to have somebody who says, 'You dimed on us and put a good friend of mine in the brig,' or something like that … it's made it much more difficult for those who witness war crimes to report those war crimes.”

Despite the appearance of overwhelming disapproval of Trump's Friday interventions, not everyone is upset with the move — including Fox & Friends co-host and former reserve military officer Pete Hegseth, who forcefully advocated for Trump to intervene in the Gallagher case. Indeed, Hegseth told Fox News that Lorance's claim that he'd been thrown under the bus by senior Pentagon leaders for political reasons was a “widespread belief” within the enlisted ranks.

“I know this is a feeling that after the Obama administration decided to promote certain people in certain ways, there became no incentive for commanders to ruffle feathers,” Hegseth said. “They were incentivized to play the game, the social justice and p.c. games. So you were not getting the military leaders who are willing to take risks for the guys who are doing the heavy lifting.”

“President Trump has emboldened the people out there making the impossible calls at impossible moments,” he added. “If you look at each of these cases, there's plenty of reasons to question the veracity of these prosecutors. These are not cases where people went into villages with the intention of killing innocent people. These are split-second decisions.”

Rep. Duncan Hunter, the Marine Corps veteran and California congressman who also advocated for Gallagher's release, shared this sentiment in his own statement on Friday.

“For years, rampant prosecutorial misconduct, political correctness, and procedures that weight the scales of justice against the accused have personified our military justice system,” he said. “Self-serving military bureaucrats have felt empowered in instituting policies that have been damning to our warriors on the front lines.”

“Today, thanks to the leadership of President Trump, these Pentagon armchair lawyers are being put on notice,' he added. “The President recognizes that our combat warriors are to be supported in meeting the incredible responsibilities we place on them and I very much appreciate his advocacy for America's warfighters.”

Retired Army Lt. Col. Allen West, the former Florida congressman who was himself relieved of command over the improper treatment of a detainee in Iraq, echoed Hegseth and Hunter's statements.

“The travesty of injustice for these men is over … These men aren't guilty of war crimes, they simply did what combat leaders are supposed to do, engage and kill the enemy,” said West. “If our Army could set Bowe Bergdahl and Bradley Manning free, who were guilty of desertion and treason, then no one should raise a contrarian voice in the matter of these pardons. Now, the military JAG officers responsible for withholding exculpatory evidence should be disciplined.

“Islamic jihadists — terrorists — are non-state, non-uniform belligerents on the battlefield. They seek to blend in with civilian populations and take cover in the midst of non-combatants,” West added in a follow-up statement. “These are not 'enemy soldiers.' They are unlawful enemy combatants, and should not be accorded any Geneva Convention rights, certainly not constitutional rights”

According to a poll from the Clarion Project, a Washington, D.C.-based non-profit devoted to “exposing the dangers of Islamic extremism while providing a platform for the voices of moderation and promoting grassroots activism,” some 77 percent of respondents believed U.S. service members should not be prosecuted for war crimes committed overseas.