The Army risks raising the ire of President Donald Trump, who pardoned Golsteyn on Nov. 15, little more than three months before the former Green Beret was expected to stand trial for murder. 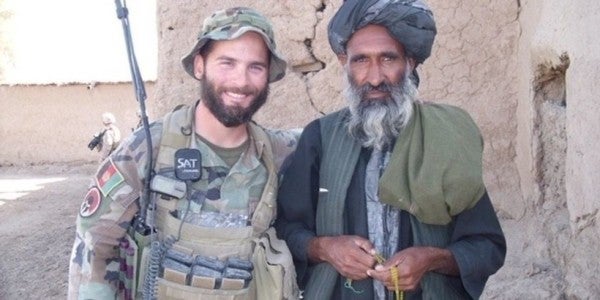 The Army has denied a request by retired Army Maj. Matthew Golsteyn restore his Special Forces tab, but the service's decision is not final, Army officials said Thursday.

It is now up to the Army Board for Correction of Military Records to determine whether Golsteyn's Special Forces tab and his Distinguished Service Cross should be reinstated, Army officials told Task & Purpose.

The Army risks raising the ire of President Donald Trump, who pardoned Golsteyn on Nov. 15, little more than three months before the former Green Beret was expected to stand trial for murder. Golsteyn has repeatedly admitted killing an unarmed Afghan man, whom he believed was a Taliban bomb-maker in 2010.

Following the pardon Golsteyn's attorney filed paperwork to restore his Special Forces tab and Distinguished Service Cross, both of which were rescinded in 2014.

The Army issued a statement on Thursday explaining the Army Board for Correction of Military Records would now adjudicate the issue and decide whether to remove a General Officer Memorandum of Reprimand from Golsteyn's official record.

But Golsteyn's attorney Phillip Stackhouse called the Army's actions a “joke” and he accused the service's leaders of acting against the wishes of the president, who assured Golsteyn his record would be completely expunged.

Stackhouse said he only learned of Beaudette's Dec. 3 decision on Thursday. Now he will forward the documentation he has on the matter to the White House counsel's office for Trump's attention.

“Maybe they think that by all of the things going on in the Middle East and by the things starting to heat up and move forward in the impeachment process that the president has lost interest or is distracted or is in some way weakened that they can take these actions in contravention to his directions,” Stackhouse told Task & Purpose on Thursday.

Trump took a special interest in Golsteyn and two other service members accused of war crimes including retired Navy SEAL Chief Eddie Gallagher, who was found not guilty of killing a wounded ISIS fighter but convicted of posing for a picture the man's corpse. Gallagher's conviction stands but the president ordered that the SEAL's rank and paygrade be restored to chief petty officer.