"The Navy follows the lawful orders of the President," Rear Adm. Charlie Brown said. "We will do so in case of an order to stop the administrative review of SOC [special operations chief] Gallagher's professional qualification." 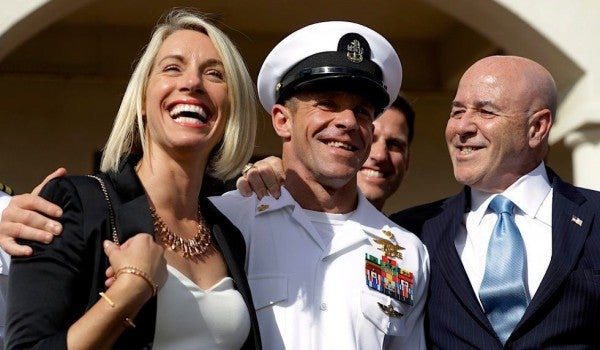 The Navy has paused proceedings that could strip Eddie Gallagher and three other SEALs of their tridents while the service awaits a written order to formally stand down, a senior Navy official told Task & Purpose on Thursday.

Rear Adm. Collin Green, the head of Naval Special Warfare Command, was expected to decide on the matter after the SEALs appeared before a review board next month. But Trump tweeted on Thursday that Gallagher was in no danger of losing his trident, a sacred symbol of being part of the SEAL community.

“The Navy will NOT be taking away Warfighter and Navy Seal Eddie Gallagher's Trident Pin,” the president tweeted. “This case was handled very badly from the beginning. Get back to business!”

In a statement on Thursday, the Navy's top spokesman said the service is aware of the president's tweet and expects to receive further guidance on the matter.

“The Navy follows the lawful orders of the President,” Rear Adm. Charlie Brown said in the statement. “We will do so in case of an order to stop the administrative review of SOC Gallagher's professional qualification. We are aware of the President's tweet and we are awaiting further guidance.”

A military jury acquitted Gallagher of murder in July but convicted him of posing or a picture with an ISIS fighter's corpse. He was sentenced to be demoted one rank, but the president subsequently ordered that Gallagher be restored to the rank and paygrade of chief petty officer. Gallagher's conviction still stands.

The New York Times' David Philipps first reported on Tuesday that Green would decide whether to revoke the tridents for Gallagher and three other SEALs who served with him: Gallagher's former platoon commander Lt. Jacob Portier as well as Lt. Cmdr. Robert Breisch and Lt. Thomas MacNeil.

Naval Special Warfare did not respond to multiple phone calls from Task & Purpose. Green could not be reached for comment.