Navy could take away tridents for Eddie Gallagher and other SEALs

Rear Adm. Collin Green, the head of Naval Special Warfare Command, will decide whether to rescind the tridents for Eddie Gallagher and three other SEALs. 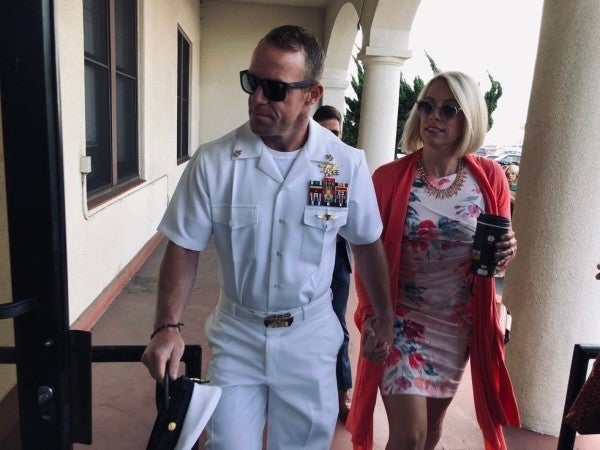 The admiral in charge of Navy special operators will decide whether to revoke the tridents for Eddie Gallagher and other SEALs involved in the Navy's failed attempt to prosecute Gallagher for murder, a defense official said Tuesday.

The New York Times' David Philipps first reported on Tuesday that the Navy could revoke the SEAL tridents for Gallagher as well as his former platoon commander Lt. Jacob Portier and two other SEALs: Lt. Cmdr. Robert Breisch and Lt. Thomas MacNeil.

The four SEALs will soon receive a letter that they have to appear before a board that will consider whether their tridents should be revoked, a defense official told Task & Purpose on condition of anonymity.

A military jury found Gallagher not guilty of killing a wounded ISIS fighter in 2017, but the SEAL was convicted of posing for a picture with the dead man. Gallagher had been sentenced to be reduced one rank to first class petty officer, but President Donald Trump recently ordered that the Navy restore him to the rank and pay grade of chief petty officer.

At the board, the SEALs will be informed of the violations they are accused of and be given the opportunity to respond, the official said. The board members will make a recommendation for action that will go to Rear Adm. Collin Green, the head of Naval Special Warfare Command, who will make a final decision on the SEALs' tridents.

A spokeswoman for Naval Special Warfare Command declined to say what action Green might take.

“We have implemented the President's order to restore Chief Gallagher's paygrade,” said Navy Capt. Tamara Lawrence. “Commander, Naval Special Warfare Command is responsible for the Naval Special Warfare Force. He remains focused on delivering a capable, ready, and lethal maritime special operations force in support of national security objectives, which includes assessing the suitability of any member of his force via administrative processes.”

Gallagher's attorney Tim Parlatore said that although the Navy has not informed him that it intends to rescind his client's trident, he knows that is what will happen because media outlets are reporting it.

“They are even reporting that the secretary of the Navy and the chief of naval operations have given their blessing to do it,” Parlatore told Task & Purpose on Tuesday evening.

Both Navy Secretary Richard Spencer and Chief of Naval Operations Adm. Mike Gilday support their commanders' ability to carry out their responsibilities, including Rear Adm. Green, representatives for Spencer and Gilday said on Tuesday.

Should the Navy go through with taking away Gallagher's trident, the Navy SEAL would file a lawsuit against the service in the court of federal claims, Parlatore said.

“Even having this proceeding is a direct affront, an insult, to the president by Adm. Green,” Parlatore said. “I don't want to speak for the president, but if I were sitting in the White House, not only would I restore , but I'd have Adm. Green arrested and court-martialed for insubordination.”