Rear Adm. Collin Green reportedly vowed to resign or be fired rather than not revoke now-retired SEAL Eddie Gallagher of his trident. 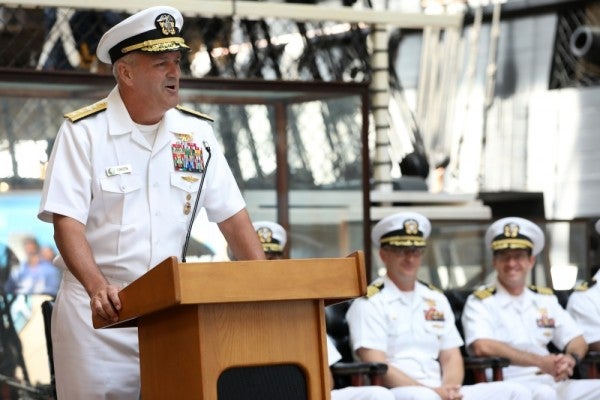 The head of Naval Special Warfare Command, who challenged President Donald Trump over stripping retired SEAL Chief Eddie Gallagher of his SEAL status last year, will step down from his post in September, according to a report published by The Intercept on Saturday.

Rear Adm. Collin Green, who took the helm of NSW in 2018, made headlines in November when he and Navy Secretary Richard Spencer reportedly vowed to resign or be fired rather than follow Trump's instructions to not revoke Gallagher of his SEAL Trident, the symbol of his SEAL status, after a high-profile court martial acquitted Gallagher of murder charges while finding him guilty of posing for a picture with a corpse.

Green did not answer multiple phone calls from Task & Purpose, and officials at NSW did not respond to requests for comment. Rear Adm. Charles Brown, the Navy's chief spokesman, declined to say whether The Intercept's reporting was accurate. “We have no flag officer announcements to make at this time,” Brown said in an email to Task & Purpose on Tuesday.

According to The Intercept, Green's time as NSW commander had been extended from two years to three, but his decision to step down from the post means he will decline the third year.

Green's tenure coincided with a slew of discipline problems in the Navy special warfare community, including two SEALs and two Marine Raiders being accused of killing a Green Beret in Mali; a SEAL platoon being kicked out of Iraq over allegations of drinking and sexual assault; members of a SEAL team using cocaine and other drugs; and Gallagher being accused of killing a wounded ISIS fighter.

Gallagher was found not guilty of murder. He was convicted of posing for a picture with the fighter's corpse. However, Green told his troops “we have a good order and discipline problem that must be addressed immediately” in August.

Green's claims were somewhat refuted last week after a Special Operations Command ethics review argued that there were no “systemic ethics problem,” in the special operations community, though there was a range of underlying problems stemming from a high operations tempo and insufficient leadership, the review said.

Green will likely be replaced by Rear Adm. H. Wyman Howard, III., who currently heads Special Operations Command Central, The Intercept reported. According to an Intercept report from 2017, while he was in command of SEAL Team 6, Howard distributed hand-made hatchets to his troops and encouraged them to “bloody the hatchet.” while deployed to Iraq and Afghanistan.