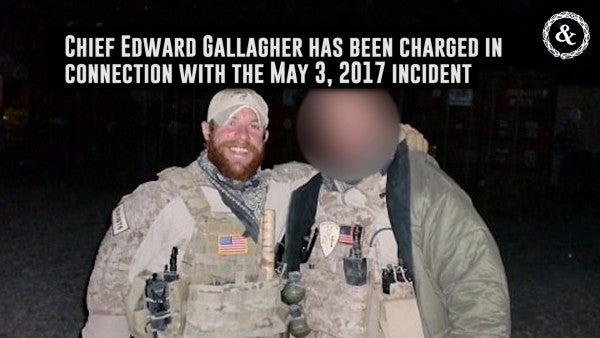 Two of the SEAL Team 7 leaders who were fired after a platoon was sent home early from Iraq have accused the admiral in charge of Naval Special Warfare Command of making them “scapegoats” because he was under pressure to fix disciplinary issues within the SEAL community.

Rear Adm. Collin Green, who is in charge of all SEALs, had lost confidence in their ability to lead, “That resulted from leadership failures that caused a breakdown of good order and discipline within two subordinate units while deployed to combat zones,” a Naval Special Warfare Command spokeswoman said at the time.

In August, SEAL Team 7 Foxtrot Platoon was ordered to return home early from its Iraq deployment amid allegations that members drank alcohol at a July 4th party and that a senior enlisted platoon member had allegedly raped a female service member assigned to the platoon.

But in a complaint filed with the Defense Department Inspector General's Office, an attorney for Mason and Spangler argued that Green fired the two SEAL Team 7 “to salvage the remains of his own career.”

“Green's abuse of power destroyed their reputations,” he added.

Navy Times editor Carl Prine first reported on the IG complaint, which does not shed any further light on the allegation that a SEAL Team 7 member raped a female service member.

“The GONO violations are a red herring as RADM Green is well aware that NSW had established their own rules regarding the consumption of alcohol downrange,” Sullivan wrote. “RADM Green and CMC King should be subjected to a polygraph examination regarding their knowledge of consuming alcohol in violation of GONO.”

Sullivan also claims that Green's decision to fire Mason and Spangler overruled military officials who had looked into allegations against SEAL Team 7 members, including the Army three-star general who is second-in command of U.S. military operations in Iraq and Syria, who wrote in a July 31 report he had “complete trust and confidence” in the team's leadership and Mason's ability to command.

The following day, Green allegedly called the head of special operations in Iraq to say he was “very upset” with the general's comments because they “did not fit his narrative,” Sullivan wrote.

In the complaint, Sullivan argues that Green was trying to appease former Chief of Naval Operations Adm. John Richardson, who had berated Green over problems in the SEAL community.

“It has been reported from witnesses that the CNO screamed at RDML Green and stated during the confrontation words to the effect that the only reason I am not firing you is because I do not have any SEAL admiral to take your place,” Sullivan wrote in the IG complaint.

It is not clear from the complaint if the confrontation happened before or after Special Warfare Operator 1st Class Eddie Gallagher was acquitted of murder for allegedly killing a wounded ISIS fighter in 2017. Gallagher, who was assigned to SEAL Team 7 Alpha Platoon before Mason became the team leader, was convicted of posing with the fighter's corpse.

Sullivan was the attorney for Gallagher's commanding officer, Lt. Jacob Portier, who had been accused of covering up for Gallagher. All charges against him were ultimately dropped.

In the IG complaint, Sullivan wrote that Green retaliated against Mason by accusing him of not doing more to address the “Gallagher Effect.”

“RADM Green categorically refuses to respect the integrity of the military justice process that acquitted Special Operations Chief Edward Gallagher of all serious charges in his high profile case that captivated the county and the President of the United States,” Sullivan wrote.

“RADM Green's actions directly challenge and undermine the President who publicly congratulated SOC Gallaher and his family, after the acquittal. RADM Green's continued retaliation against ST 7 publicly undermines the President in front of the NSW community.”

Navy spokesman Lt. Sam Boyle declined to respond to any of the allegations of misconduct that Sullivan raised in the IG complaint.

“It would be inappropriate to discuss a complaint submitted for consideration and potential review by the Inspector General,” Boyle said. “We take allegations of misconduct seriously and the IG investigates all credible allegations.”