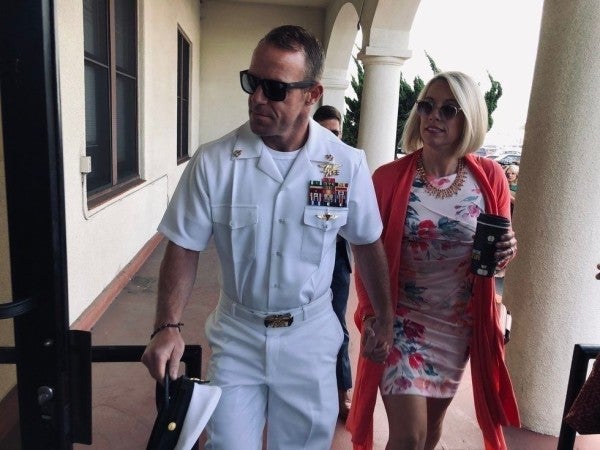 In an episode of 'The Weekly,' the New York Times aired intense interviews from several SEAL Team 7 special operators describing war crimes that Gallagher's allegedly committed during a 2017 deployment to Iraq, crimes the Navy SEAL chief was found not guilty of at trial in June.

In an interview with ABC News' 'This Week,' National Security Advisor Robert O'Brien dismissed the accounts featured in the New York Times report as merely the opinions of “a selective group of SEALs.”

“There were also many, many SEALs and many folks in the special warfare community that support Chief Gallagher, that appealed to the president and asked him for this clemency,” O'Brien said. “The president takes a look at the situation and he does what he thinks is in the best interest of the country.”

"We put these men and women in very tough situations and I think the president took that into account," Robert O'Brien tells @jonkarl when pressed about Trump pardoning Navy SEAL Gallagher, who was called "toxic" and "evil" by fellow SEALs in new video. https://t.co/gJKGeVAu7L pic.twitter.com/zHd6bUK9mF

“It's very troubling that we send folks out that have to make split-second decisions dealing with terrorists, dealing with bomb-makers, in very, very, difficult decisions overseas,” he added. “What the president has said is we're going to stand behind our warriors. We're going to have their backs.”

While Gallagher was found not guilty of murdering an ISIS fighter during a May 2017 mission in Mosul, he was found guilty of posing for photographs with the fighter's corpse, a verdict that prompted the Navy to move to eject him from the Navy SEAL community.

In November, Trump announced that he had granted Gallagher clemency for that crime and directed Navy officials to restore Gallagher's rank and status as a Navy SEAL, a move which eventually led to the resignation of Navy Secretary Richard Spencer.