NAVAL BASE SAN DIEGO — The prosecution rested its case against Navy SEAL Chief Eddie Gallagher on Tuesday after a week of testimony from members of SEAL Team 7 platoon, medical and forensic experts, and NCIS agents. 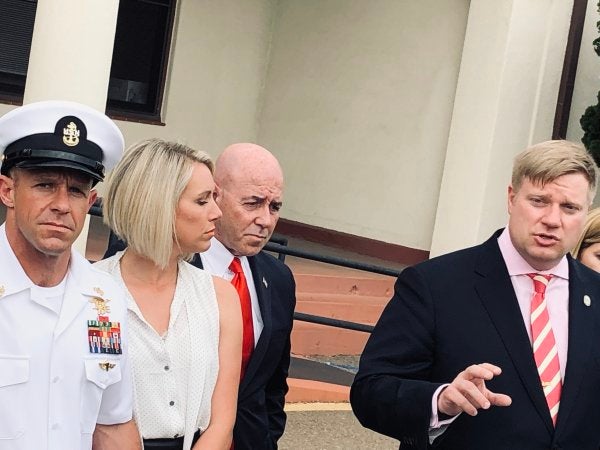 NAVAL BASE SAN DIEGO — The prosecution rested its case against Navy SEAL Chief Eddie Gallagher on Tuesday after a week of testimony from members of SEAL Team 7 Alpha Platoon, medical and forensic experts, and NCIS agents.

The focus of Tuesday was on the investigative steps taken by the lead agent, Joseph Warpinski, 34, in addition to jurors being shown text messages sent by Gallagher to fellow SEALs with photos of a dead ISIS fighter that prosecutors characterized as “trophy shots.”

Gallagher, 40, is accused of stabbing a wounded ISIS fighter and firing a sniper rifle at civilians in Iraq. He has pleaded not guilty.

Warpinski was questioned by defense attorney Marc Mukasey for nearly four hours on NCIS procedures, steps he took in the investigation, and how he spoke with witnesses. The agent agreed with Mukasey that NCIS should be impartial fact-finders and shouldn't take sides in a case, and acknowledged he had made some mistakes.

“There were definitely some mistakes,” Warpinski testified. Among those that came up in his testimony were text messages he had sent to witnesses, such as his calling an attorney on the case an “idiot” or his telling one witness at the beginning of an interview, “obviously man we want to talk about Eddie Gallagher.”

Mukasey brought up a number of things Warpinski had said or done to illustrate he was biased against Gallagher. In his testimony, for example, Warpinski acknowledged that he told Chief Craig Miller, the first person he interviewed, that he already had a “take” on the case, despite his not knowing all the facts or evidence.

“That's what I said yes,” Warpinski said, before Mukasey accused him of going after “one guy and one guy only” — Chief Eddie Gallagher. Warpinski denied the accusation.

Besides challenging Warpinski's credibility, Mukasey also asked him of his earlier reports with witnesses who testified last week. Miller, for example, said in his testimony that after Gallagher allegedly stabbed the ISIS fighter in the jugular, the blood flowed out like “baby vomit.” And former Special Warfare Operator 1st Class Dylan Dille testified that he saw “vapor trails” fired from the northern sniper hide where Gallagher was allegedly firing on innocent civilians.

Warpinski testified that he didn't recall or didn't document stabbing of the jugular vein, blood coming out like baby vomit, or the spotting of vapor trails.

Mukasey also challenged differences found in what witnesses told Warpinski and how he characterized it in his report summaries. In an interview with SO1 Joe Arrington, Mukasey said, there was some discussion over whether a camera had filmed everything that happened on the day of the alleged murder, and Arrington said that it might show “Navy SEALs doing fucked up shit and it would be bad for the community.”

Warpinski's report, however, said that Gallagher's actions would be bad for the community. “You twisted it to screw Eddie Gallagher,” Mukasey said. Warpinski denied that was the case, but admitted his report did not reflect exactly what Arrington had said.

Prosecutors allowed Warpinski to further explain his actions and disputed a narrative that he tried to influence witnesses.

“Did you tell any of these witnesses what they saw and what they reported?” asked prosecutor Lt. Scott MacDonald.

Prosecutors also revealed text messages Gallagher sent to fellow SEALs with photos of himself with the deceased ISIS fighter, in which he bragged about having a “cool story.”

In one text sent to Senior Chief Stephen Snead, Gallagher wrote, “I got a cool story for you when I get back. I got my knife skills on.” Attached was a photo of Gallagher, kneeling in front of three other SEALs, holding up the fighter's head with a knife in his opposite hand. Snead responded, “haha fuck yeah.”

In another text with a photo of the dead photo along with many other members of the SEAL platoon behind Gallagher, who is kneeling near the body, Gallagher wrote, “Good story behind this. Got him with my hunting knife.”

Chief Warrant Officer Brian Gardner wrote back, “Nice. Be careful with pics.” Gallagher responded, “That's the only one and I only trust you.”

Immediately after the prosecution rested its case, defense attorney Tim Parlatore motioned to drop all charges in the case. After about an hour of deliberation, the judge denied the motion.

The trial continues on Wednesday, with the defense expected to call its own witnesses to dispute other SEALs' testimony.