After Navy SEAL Chief Eddie Gallagher was found not guilty of murder, the prosecutors who lost the case received awards for ‘superb results’

The Navy's Region Legal Service Office in San Diego hosted an award ceremony on July 10 in one of its courtrooms for four attorneys and four legal support staffers involved in the Gallagher case. 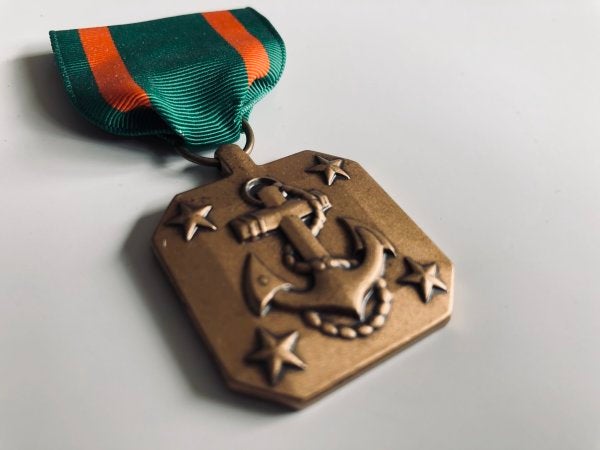 A week after Navy SEAL Chief Eddie Gallagher was found not guilty of murder at a military court-martial that garnered international media attention, members of the U.S. government team that prosecuted him were awarded medals for their “superb results” and “expert litigation,” according to legal filings obtained by Task & Purpose.

The Navy's Region Legal Service Office in San Diego hosted an award ceremony on July 10 in one of its courtrooms for four attorneys and four legal support staffers involved in the Gallagher case, according to a motion filed in a companion case on July 19 by military attorneys representing Navy SEAL Lt. Jacob Portier, Gallagher's former platoon commander.

The motion also claimed that the RLSO Chief of Staff said words to the effect of “no matter the result, we were right to prosecute [Gallagher],” and “justice was done.”

“The Navy does not comment on matters currently in litigation, to include motions,” Cmdr. Jereal Dorsey, a Navy spokesman, told Task & Purpose. “I can confirm, however, that an awards ceremony occurred where letters of commendation and Navy Achievement Medals were presented to individuals on the prosecution team who were deemed, by their immediate superiors, to have performed above their normal duties.”

When asked for a copy of the award citations, a spokeswoman for the Navy's Judge Advocate General's Corps instructed this reporter to submit a Freedom of Information Act request. That request was submitted by Task & Purpose to the Navy on Monday.

However, Task & Purpose obtained the citations for four attorneys on the case from a source soon after this article was published.

Lt. Scott McDonald, his citation said, assumed the role of lead trial counsel in the Gallagher case just one month before trial, and “immediately litigated multiple motions alleging constitutional violations,” while reviewing many pages of discovery and multiple hours of video over a two-week period. “At trial, he brilliantly cross-examined defense witnesses and expertly delivered the government's case in rebuttal.”

Also receiving an award was Lt. Brian John, whose citation said he “took the lead in preparing the government's most challenging witnesses,” and “due to an unforeseen personnel change, he fleet up to lead counsel on the eve of trial and demonstrated remarkable resiliency and grit through a three-week contested proceeding.”

The most junior member of the prosecution team, Lt. George Hageman, was similarly commended for providing “exceptional pretrial litigation support,” drafting “responses to multiple complex defense motions relating to search and seizure issues and potential discovery violations.” The citation also noted that, “in the courtroom, he adeptly laid evidentiary foundations and assisted in the development of cross-examinations for several defense witnesses.”

A fourth attorney, whose name was redacted in the citations, “demonstrated brilliant legal acumen while providing exceptional pretrial litigation support,” the award read, adding that she “took the lead in coordinating and preparing the government's experts, and spent countless hours and weekends preparing fact and expert witnesses. Her mastery of discovery also provided crucial continuity when key members of the trial team turned over on the eve of trial.”

In the July 19 filing, defense attorneys zeroed in on the attendance at the ceremony of Capt. Aaron Rugh — the judge in the Gallagher case — as evidence he may be biased against Portier, who has been charged with failing to properly report war crimes allegations against his chief up the chain of command.

Rugh is also the judge in the Portier case, which goes to trial on Sept. 3, a Navy official told Task & Purpose on Monday.

Defense attorneys argued that the appearance of Rugh at the ceremony call “his impartiality into question” since he was at an event where only the prosecutors in the Gallagher case were commended.

Though some of the same attorneys who prosecuted Gallagher were originally assigned to the Portier case, all have been switched out for different attorneys with no ties to the high-profile Gallagher court-martial, the Navy official said.

Defense attorneys also took issue with remarks made at the ceremony and “other obvious insinuations that SOC Gallagher had committed more serious misconduct than he was found guilty of,” the motion said.

Eddie Gallagher (center) celebrates outside the courtroom after being found not guilty of murder.
(Associated Press/Gregory Bull)

Gallagher, 40, was tried on charges of premeditated murder over an alleged stabbing of a wounded ISIS fighter in Mosul, and attempted premeditated murder relating to alleged sniper shots taken at an unarmed elderly man and a young girl. He was also charged with obstruction and wrongfully posing for an unofficial photo with a human casualty.

Cleared of the most serious charges on July 3, the chief was found guilty on the single photo charge, which got him a sentence of four months' confinement and reduction in rank to E6.

Gallagher has since been reduced in rank to Special Warfare Operator 1st Class, according to a source familiar with the matter, though his final sentence has not yet been approved by the convening authority.

“Highlights from SOC Gallagher's court martial included an egregious breach of the Defense's attorney-client privilege, significant Constitutional violations, and a surprise revelation by a government witness who apparently confessed to murder,” the motion stated, referencing both the bungled spying operation by the government to find the source of media leaks that resulted in the removal of the lead prosecutor, Cmdr. Christopher Czaplak, and the shocking testimony of SO1 Corey Scott, who said that he, not Gallagher, killed the ISIS fighter by covering his breathing tube.

In a separate legal filing, Jeremiah Sullivan, Portier's civilian attorney, requested the government turn over all documents related to the award ceremony and other materials regarding the spying operation, which he plans to use in additional motions to try to get the case thrown out over alleged unlawful command influence and government obstruction.

“The Navy recently completed the prosecution of SOC Eddie Gallagher. The case became a national embarrassment when Navy Prosecutors were caught illegally spying on Defense Counsel, the Press, and even one of President Trump's personal lawyers,” Sullivan wrote in the memorandum, which he sent to prosecutors on July 19.

“After the spying operation became a well-publicized disaster, the Regional Legal Service Office (RLSO) sought 'top cover' from the Office of the Judge Advocate General (OJAG) and strategically released a formal press statement through their spokeswoman falsely asserting that the spying operations was legal,” Sullivan continued, calling the press release a “well-crafted message” to the judge and convening authority in the case.

“Despite OJAG asserting to everyone that the spying operation was lawful, the Marine Corps recognizing the unlawful nature of the Navy's unethical actions, quickly removed their Marine Corps prosecutor from the case,” Sullivan wrote. “However, the JAGC would not admit any fault and justified their actions while the public watched with disgust. Following another failed attempt by Navy prosecutors to justify their unethical operation, the Military Judge found that Navy prosecutors violated the U.S. Constitution and ordered CDR Czaplak removed from the case. The new Navy prosecution team proceeded to trial and lost.”

“The Navy JAGC then sent a clear message again to the Military Judge, Convening Authority, the Staff Judge Advocate for Navy Region Southwest, and prospective Members, by hosting an awards ceremony in the RLSO SW courtroom and handing out Navy Achievement Medals and Letters of Appreciation for the RLSO's accomplishments in the Gallagher case,” he added. “Even more troubling, the Defense was alerted that the Military Judge attended the awards ceremony.”

Sullivan asked for a response to his request for documents within five days but has not yet received anything from the government, he told Task & Purpose on Monday.

This story has been updated with additional information about the award citations and a statement from a Navy spokesman.