Shortly after Navy SEAL Chief Eddie Gallagher allegedly murdered a wounded ISIS prisoner, half a dozen of his SEAL teammates watched as one SEAL flew a drone around their compound and hovered it just inches over the dead man's body. 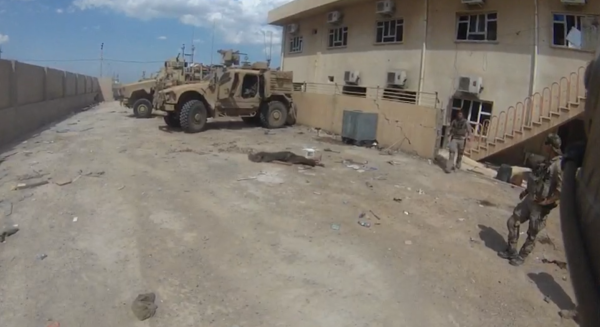 Shortly after Navy SEAL Chief Eddie Gallagher allegedly murdered a wounded ISIS prisoner, about half a dozen of his SEAL teammates watched as one SEAL flew a drone around their compound and hovered it just inches over the dead man’s body.

It was yet another ethical lapse for the men of SEAL Team 7 Alpha Platoon, many of whom had just taken a group photograph with the deceased victim after their commander had held an impromptu reenlistment ceremony for Gallagher near the body. Although some expressed remorse in courtroom testimony over their participation in the photo, video footage from later that morning showed a number of SEALs acted with little regard for the remains of Gallagher’s alleged victim.

The video — which was shown to the jury and courtroom spectators last week in the trial of Gallagher — was recently obtained by Task & Purpose.

The scene was filmed on Special Warfare Operator 1st Class T.C. Byrne’s helmet-mounted camera just hours after prosecutors allege that Gallagher murdered the prisoner while he and others were giving him medical aid.

It shows a number of SEALs watching as Byrne pilots a DJI quadcopter drone from the ground of their compound in Mosul, Iraq, on May 3, 2017. Covered by a blanket, the right arm and both feet of the dead fighter can still be seen.

As Byrne pilots the drone, other members of the platoon watch and smoke cigarettes. Then as the drone hovers over the body, the platoon commander, Lt. Jacob Portier, walks down the stairs of a nearby building towards his men and then looks back toward the drone.

Portier, who has been separately charged for allegedly failing to report Gallagher, smiles as a laugh can be heard from someone off-camera.

The drone flies low and slow over the body, at times mere inches from the man’s face, in what Gallagher’s defense attorney Tim Parlatore described in court as the SEALs’ “bouncing a drone off the ISIS terrorist’s head.”

Miller himself was filmed by Byrne in a separate video shortly after the alleged killing, learning how to pilot the drone under the direction of former SO1 Dylan Dille. This video was also obtained by Task & Purpose.

“Craig make it do a trick,” Byrne says as he’s walking behind Miller, who then turns back and smiles.

Although the videos do not show Gallagher, they offer some insight into the demeanor of some of the SEALs who would later testify against him. They are part of a cache of documents, photos, videos, and other evidence that jurors will review as they consider Gallagher’s fate.

Miller was one of two eyewitnesses to the ISIS fighter’s death that morning who have testified in court.

“I kept walking and I saw him stab the prisoner in the neck,” SEAL Chief Craig Miller testified, noting what he described as a bloody scene. “It looked similar to a baby throwing up.”

Moments later, Miller testified, he sought out Portier inside a bombed-out building on their compound and told him what had just happened. “That was completely fucked,” Miller apparently told Portier, according to NCIS documents.

Later that evening, according to Miller, a number of SEALs met to discuss the events of that day. Gallagher’s alleged crime was the main point of discussion. “I told them what I saw and I asked if anybody was okay with it,” Miller testified, adding that as the meeting came to a close, Gallagher walked in and pulled him aside.

“Eddie the guys are not good with this,” Miller testified that he told Gallagher. After being asked which guys, Miller said, “I’m not good with it.”

Gallagher, a veteran SEAL, is accused of stabbing a wounded ISIS fighter and firing a sniper rifle at civilians in Iraq. He has pleaded not guilty.