The jury in the military trial of Navy SEAL Chief Eddie Gallagher has found him not guilty of premeditated murder and attempted murder during a deployment to Iraq in 2017. 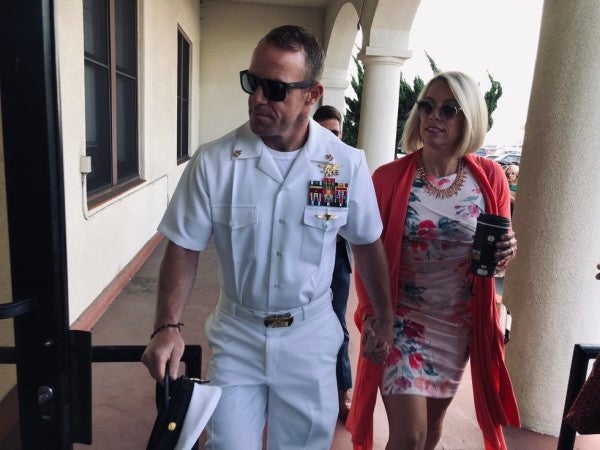 The jury in the military trial of Navy SEAL Chief Eddie Gallagher has found him not guilty of premeditated murder and attempted murder during a deployment to Iraq in 2017.

He was, however, found guilty of unlawfully posing for a picture with a human casualty.

The verdict was reached after about a day of deliberation. The government and defense attorneys both made closing arguments in the case on Monday, after presenting testimony from numerous witnesses over two weeks.

The charge of unlawfully posing for a photo — which was shown throughout the court martial — carries a maximum penalty of four months' confinement, though Gallagher is likely to get credit for the eight months he served in the brig prior to his trial, Navy spokesman Brian O'Rourke told Task & Purpose.

Throughout the trial, prosecutors painted Gallagher as a man, proud of his kill, who sent a “trophy photo” of the murdered detainee to friends, while the defense argued that the government and NCIS agents had a “target fixation” on Gallagher that led them to not ask important questions or consider alternatives.

Navy Cmdr. Jeff Pietrzyk, the lead prosecutor, acknowledged that a wounded ISIS fighter wouldn't get much sympathy from the jury or anyone else. “I'm not going to argue to you that this was a particularly sympathetic victim,” he said. Before he was hit by a U.S. air strike, Pietrzyk said, “he would've done anything in his power to kill Americans.”

But, Pietrzyk said, he was no longer fighting, and receiving medical care. “At that point, he was no longer a lawful target,” he said. “We're not ISIS. When we capture someone they're out of the fight. That's it.”

In laying out the government's case, Pietrzyk mentioned other SEALs had testified that Gallagher had fired on innocent civilians from a sniper tower. He went on to say that Gallagher had tried to obstruct justice and retaliate against those who reported on him by threatening that he “had shit on all of them.”

Defense attorney Tim Parlatore, however, asserted that “this case is not about a murder. It's about a mutiny.” He said it was only a few “young entitled” members of the SEAL platoon who hated Gallagher that reported him for war crimes. Parlatore said those SEALs had taken part in a mutiny and conspired in a text message “sewing circle” to get back at him for stealing items from them and putting them at unnecessary risk on the battlefield.

“When the chief pushed them, they didn't like it,” Parlatore said.

Gallagher is expected to be sentenced later on Tuesday, O'Rourke said.