President Donald Trump said in a congratulatory tweet on Wednesday morning that he was "glad he could help" Navy SEAL Chief Eddie Gallagher, a day after Gallagher was found not guilty of murder but found guilty of posing for a photo with a corpse. 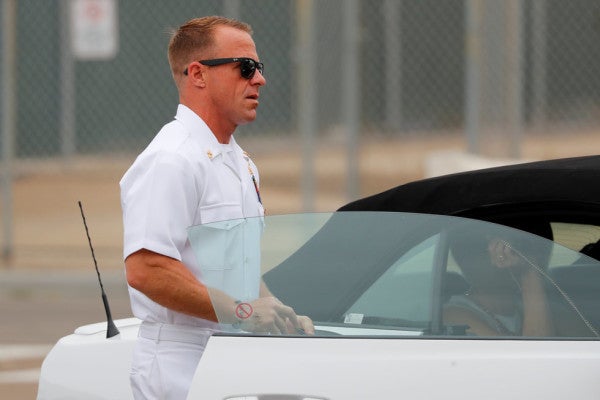 President Donald Trump said in a congratulatory tweet on Wednesday morning that he was “glad he could help” Navy SEAL Chief Eddie Gallagher, a day after Gallagher was found not guilty of murder but found guilty of posing for a photo with a corpse.

“Congratulations to Navy Seal Eddie Gallagher, his wonderful wife Andrea, and his entire family,” Trump wrote. “You have been through much together. Glad I could help!”

Trump tweeted his congratulations before Gallagher had even been sentenced.

Congratulations to Navy Seal Eddie Gallagher, his wonderful wife Andrea, and his entire family. You have been through much together. Glad I could help!

The SEAL Chief faces a maximum punishment of four months confinement over the photo charge. Since he already served more than 8 months in the brig prior to his trial, the punishment will amount to time served and he'll walk free.

However, a Navy official told Task & Purpose that with any sentence involving confinement, the rules for court-martial require an automatic reduction in rank to E-1. Essentially, the official said, if the jury decides to sentence Gallagher to any brig time, even if it's time served, he'll be retiring as an E-1 instead of an E-7.

The jury found him not guilty of premeditated murder and attempted murder, and not guilty of obstruction of justice over accusations he tried to intimidate his fellow SEALs from reporting him.

The jury found him guilty only of unlawfully posing for a picture with a human casualty. Prosecutors showed two photos of Gallagher posing with a body throughout his trial.

The verdict was reached after about a day of deliberation. The government and defense attorneys both made closing arguments in the case on Monday, after presenting testimony from numerous witnesses over two weeks.

It's not clear what Trump meant by “help” that he's extended toward Gallagher and his family. Gallagher's legal team has close ties with members of the Trump administration, and Trump previously ordered Gallagher released from pre-trial confinement. The New York Times also reported in May that Trump had been considering a pardon for Gallagher before he went to trial.

One of Gallagher's civilian attorneys, Tim Parlatore, told Task & Purpose the president's help was in reference to getting Gallagher out of pre-trial confinement.

As Parlatore explained, there were nearly 6,000 pages of discovery his team had to go through with Gallagher in preparation for trial. He said the government confined Gallagher to “break his spirit” instead of its intended purpose — to protect the community or stop someone from fleeing.

“The reason we won this case is because we were able to prepare, and to go into that trial ready to attack the government's evidence in a way that would've been extraordinarily difficult if he were still sitting in the brig in Miramar,” Parlatore said.

Gallagher is expected to be sentenced later on Wednesday morning.