Chief of Naval Operations Adm. Mike Gilday upheld the sentence for Navy SEAL Eddie Gallagher, who earlier this year was found not guilty of allegedly killing an ISIS detainee in Iraq, allowing him to retire at a reduced rank of First Class Petty Officer (E6) rather than being automatically reduced to an E1 in accordance with Navy regulations 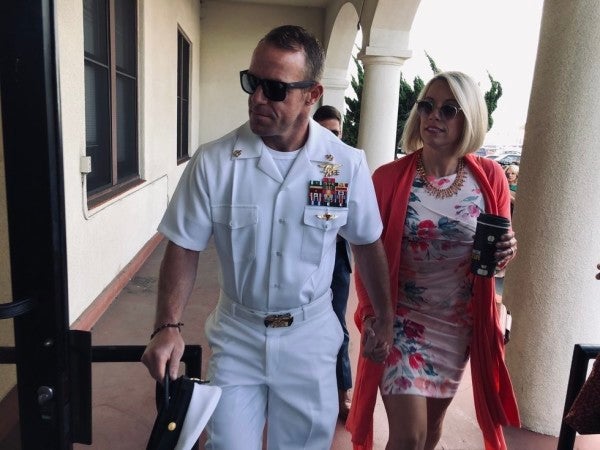 Chief of Naval Operations Adm. Mike Gilday on Tuesday upheld the sentence for Navy SEAL Eddie Gallagher, who earlier this year was found guilty of unlawfully posing with a corpse Iraq but not guilty of allegedly killing an ISIS detainee, allowing him to retire at a reduced rank of First Class Petty Officer (E-6) rather than being automatically reduced to an E-1 in accordance with Navy regulations.

Gilday “thoroughly reviewed the record of trial, along with the clemency request submitted by the defense in the General Court-Martial of Special Operations Chief Petty Officer Edward Gallagher,” Cmdr. Nate Christensen, spokesman for the Chief of Naval Operations, told Task & Purpose in a statement.

“After careful consideration as the convening authority, Adm. Gilday decided to uphold the sentence as adjudged by a jury of Gallagher's peers, but disapproved the automatic reduction in rate to E-1.”

According to a Navy official, Capt. Aaron Rugh, the judge in the case, subsequently reduced the forfeiture of pay to two months due to previous time served, but without Gilday's intervention, Gallagher was slated for an automatic reduction in rank to E-1 due to the length of his overall sentence.

“By disapproving the automatic reduction to the rank of E-1, Adm. Gilday's decision upholds the jury's sentence and will allow Gallagher to remain as an E-6,” the Navy official told Task & Purpose. “Gallagher previously served pre-trial confinement and forfeited pay.”

In a letter to Gilday requesting clemency that was submitted to the Navy on Oct. 1., lawyers for Gallagher wrote that “no further punishment is necessary” for Gallagher following the loss of his promotion, awards, and his freedom for the crime of posing with the dead ISIS detainee that he was actually found guilty of at court-martial.

“Chief Gallagher has devoted his entire adult life to serving our country and putting himself in harm's way to keep us safe. He has eight combat deployments and numerous medals,” reads the letter. “He has endured physical damage amounting to 18 separate documented incidents of brain injuries.”

Gallagher's attorney Tim Parlatore indicated that he would likely take the issue to a higher level, when asked for comment by Task & Purpose: “Absent any intervention from the White House, he's gonna retire as an E6,” Parlatore said.

“Obviously we're disappointed that Eddie Gallagher will not be able to retire as a Chief Petty Officer,” Parlatore added. “It is unfortunate that he has to lose a significant portion of his pension for an offense that is ordinarily handled with a verbal counseling.

“In a case which has been so corrupted by illegal conduct on the part of the investigators, prosecutors, and the command, it seems Eddie Gallagher is the only one that's going to be held accountable for it.”