"The president … has a lot of latitude under the Uniform Code of Military Justice to dismiss a case or change a sentence," said Fox News contributor Pete Hegseth. "From what I understand that is likely what will happen here shortly" 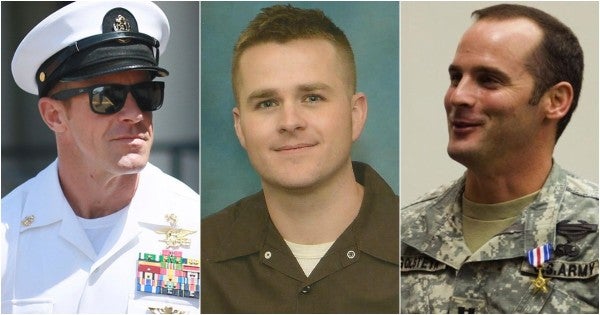 Gallagher was found not guilty of killing a wounded ISIS fighter but he was convicted of posing for a picture with the dead man and demoted to first class petty officer. Golsteyn is accused of murder after repeatedly admitting he killed an unarmed Afghan man 10 years ago, whom he believed was a Taliban bomb maker. Lorance was convicted of murder in August 2013 for ordering his soldiers to open fire on three unarmed Afghan men whom he believed were Taliban bomb makers, killing two of them.

Trump is expected to intervene in all three cases by Veterans Day, Hegseth said during Monday's edition of Fox & Friends.

“I was able to confirm yesterday from the president of the United States himself – the commander in chief – that action is imminent, especially in the two cases of Clint Lorance and Matt Golsteyn,” said Hegseth, who enjoys a close relationship with Trump.

“The president will be speaking to the Army secretary about this because both Lorance and Golsteyn are soldiers in the Army,” Hegseth continued. “It doesn't have to be a pardon or a commutation. It could be, but pardons and commutations, they imply guilt – that you've done something wrong and you need to be forgiven for that.”

“The president … has a lot of latitude under the Uniform Code of Military Justice to dismiss a case or change a sentence. From what I understand that is likely what will happen here shortly.”

Golsteyn's court-martial is expected to begin on Dec. 2 at Fort Bragg, North Carolina. His attorney Phillip Stackhouse confirmed to Task & Purpose that Trump is expected to speak to Army Secretary Ryan McCarthy about this case this week.

“We are very grateful the president is taking action in Major Golsteyn's case,” Stackhouse said on Monday. “As the most senior court-martial convening authority under the Code, the president has many options available to him – including assuming jurisdiction of this case and dismissing the charge with prejudice.”

Lorance is serving a 19-year prison sentence at the United States Disciplinary Barracks at Fort Leavenworth, Kansas. His attorney Don Brown declined to talk about his discussions with the White House about what the president might do.

“I hope that the president will sign and order to disapprove the findings and sentencing of Clint's court-martial; to order him released immediately from Leavenworth and to order to the secretary of the Army to return him to active-duty,” Brown told Task & Purpose.

The president is also expected to order the Navy to restore Gallagher's rank and prevent his SEAL trident from being taken away, Hegseth said during Fox & Friends.

The Navy had planned to take away Gallagher's trident on Friday, but they had delayed that move until Monday, said Gallagher's attorney Timothy Parlatore.

However, Parlatore wrote a letter on Sunday to Rear Adm. Collin Green, head of Naval Special Warfare Command, warning that any further punitive action taken against the SEAL would be illegal.

Gallagher has already lost his nomination for a Silver Star, a promotion to E-8, and nearly $200,000 from his pension earnings, Parlatore wrote.

“If you choose to move forward with any further unlawful retaliatory efforts against our client, we are prepared to use every additional option available to us including, but not limited to, an Article 138 complaint, a criminal complaint for violating UCMJ Article 132, and a lawsuit before the Court of Federal Claims,” Parlatore wrote.