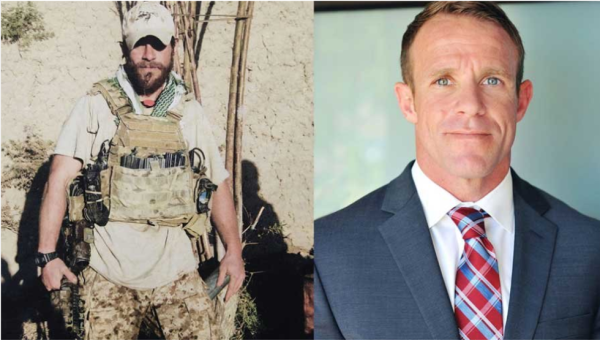 President Donald Trump has nixed any effort by the Navy to excommunicate Eddie Gallagher from the SEAL community.

“The Navy will NOT be taking away Warfighter and Navy Seal Eddie Gallagher's Trident Pin,” the president tweeted on Thursday. “This case was handled very badly from the beginning. Get back to business!”

The Navy will NOT be taking away Warfighter and Navy Seal Eddie Gallagher’s Trident Pin. This case was handled very badly from the beginning. Get back to business!

Trump's tweet came little more than an hour after Gallagher's attorney Tim Parlatore appeared on 'Fox & Friends' to criticize Rear Adm. Collin Green, the head of Naval Special Warfare Command who had ordered Gallagher to appear before a board that would recommend whether the SEAL would lose his trident.

“What he's doing here is really just an effort to publicly humiliate Chief Gallagher and stick it right in the president's eye,” Parlatore said on 'Fox & Friends.'

Separately, Parlatore has filed a complaint with the Defense Department Inspector General's Office claiming that Green “made clear his contempt” for Trump during the Nov. 18 staff meeting where he announced he was going to take away Gallagher's trident.

Shortly after the president tweeted on Thursday, Parlatore expressed his thanks to Trump, who has also recently restored Gallagher's rank to chief petty officer, lent his personal attorney to Gallagher's legal team, and ordered Gallagher released from pretrial confinement in March.

“We are extremely grateful to the commander in chief for exercising leadership where the Navy failed to,” Parlatore said.

In July, a military jury found Gallagher not guilty of killing a wounded ISIS fighter but he was convicted of posing for a photograph with the man's corpse. He had been reduced in rank to first class petty officer, but the White House announced non Nov. 14 that Trump had restored Gallagher's rank and pay grade.

Gallagher had been expected to appear before the board on Dec. 4, but would not beallowed to be represented by an attorney, Parlatore said. It was not immediately clear whether those proceedings will happen.

The latest twist in the Gallagher case could put the Navy's top leadership on a collision course with the president. Both Navy Secretary Richard Spencer and Chief of Naval Operations Mike Gilday have publicly supported Green.