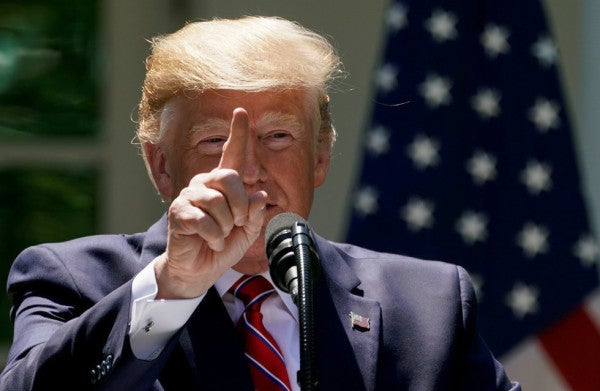 President Donald Trump is ordering the Secretary of the Navy and Chief of Naval Operations to rescind awards given to prosecutors who were “ridiculously” awarded Navy Achievement Medals after losing the case against former SEAL Chief Eddie Gallagher, he said in a tweet on Wednesday.

“Not only did they lose the case, they had difficulty with respect to information that may have been obtained from opposing lawyers and for giving immunity in a totally incompetent fashion,” Trump tweeted one day after Task & Purpose first reported prosecutors had received the awards in a July 10 ceremony.

“I have directed the Secretary of the Navy Richard Spencer & Chief of Naval Operations John Richardson to immediately withdraw and rescind the awards,” Trump continued. “I am very happy for Eddie Gallagher and his family!”

A Navy official confirmed to Task & Purpose on Wednesday that Spencer would be rescinding the awards.

Earlier this month, the Navy's Region Legal Service Office in San Diego hosted an award ceremony in one of its courtrooms for four attorneys and four legal support staffers involved in the Gallagher case, according to a motion filed in a companion case on July 19 by military attorneys representing Navy SEAL Lt. Jacob Portier, Gallagher's former platoon commander.

The motion also claimed that the RLSO Chief of Staff said words to the effect of “no matter the result, we were right to prosecute [Gallagher],” and “justice was done.”

Lt. Scott McDonald, according to his award citation, assumed the role of lead trial counsel in the Gallagher case just one month before trial, and “immediately litigated multiple motions alleging constitutional violations,” while reviewing many pages of discovery and multiple hours of video over a two-week period. “At trial, he brilliantly cross-examined defense witnesses and expertly delivered the government's case in rebuttal.”

Also receiving an award was Lt. Brian John, whose citation said he “took the lead in preparing the government's most challenging witnesses,” and “due to an unforeseen personnel change, he fleet up to lead counsel on the eve of trial and demonstrated remarkable resiliency and grit through a three-week contested proceeding.”

The most junior member of the prosecution team, Lt. George Hageman, was similarly commended for providing “exceptional pretrial litigation support,” drafting “responses to multiple complex defense motions relating to search and seizure issues and potential discovery violations.” The citation also noted that, “in the courtroom, he adeptly laid evidentiary foundations and assisted in the development of cross-examinations for several defense witnesses.”

A fourth attorney, whose name was redacted in the citations, “demonstrated brilliant legal acumen while providing exceptional pretrial litigation support,” the award read, adding that she “took the lead in coordinating and preparing the government's experts, and spent countless hours and weekends preparing fact and expert witnesses. Her mastery of discovery also provided crucial continuity when key members of the trial team turned over on the eve of trial.”

In the July 19 filing, defense attorneys zeroed in on the attendance at the ceremony of Capt. Aaron Rugh — the judge in the Gallagher case — as evidence he may be biased against Portier, who has been charged with failing to properly report the war crimes allegations against Gallagher up the chain of command.

Rugh is also the judge in the Portier case, which goes to trial on Sept. 3, a Navy official told Task & Purpose on Monday.

Defense attorneys argued that the appearance of Rugh at the ceremony call “his impartiality into question” since he was at an event where only the prosecutors in the Gallagher case were commended.

Gallagher, 40, was tried on charges of premeditated murder over an alleged stabbing of a wounded ISIS fighter in Mosul, and attempted premeditated murder relating to alleged sniper shots taken at an unarmed elderly man and a young girl. He was also charged with obstruction and wrongfully posing for an unofficial photo with a human casualty.

Cleared of the most serious charges on July 3, the chief was found guilty on the single photo charge, which got him a sentence of four months' confinement and reduction in rank to E6.

Gallagher has since been reduced in rank to Special Warfare Operator 1st Class, according to a source familiar with the matter, though his final sentence has not yet been approved by the convening authority.

“Highlights from SOC Gallagher's court martial included an egregious breach of the Defense's attorney-client privilege, significant Constitutional violations, and a surprise revelation by a government witness who apparently confessed to murder,” the motion stated, referencing both the bungled spying operation by the government to find the source of media leaks that resulted in the removal of the lead prosecutor, Cmdr. Christopher Czaplak, and the shocking testimony of SO1 Corey Scott, who said that he, not Gallagher, killed the ISIS fighter by covering his breathing tube.