The trial of Navy SEAL Chief Eddie Gallagher officially kicked off on Tuesday with the finalization of the jury panel, opening statements, and witness testimony indicating that drinking alcohol on the front lines of Mosul, Iraq in 2017 seemed to be a common occurrence for members of SEAL Team 7 Alpha Platoon. 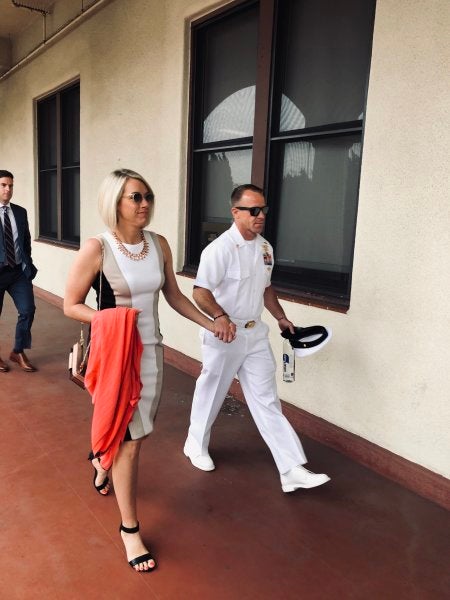 NAVAL BASE SAN DIEGO — The trial of Navy SEAL Chief Eddie Gallagher officially kicked off on Tuesday with the completion of jury selection, opening statements, and witness testimony indicating that drinking alcohol on the front lines of Mosul, Iraq in 2017 seemed to be a common occurrence for members of SEAL Team 7 Alpha Platoon.

Government prosecutors characterized Gallagher as a knife-wielding murderer who not only killed a wounded ISIS fighter but shot indiscriminately at innocent civilians, while the defense argued that those allegations were falsehoods spread by Gallagher's angry subordinates, with attorney Tim Parlatore telling the jury that “this trial is not about murder. It's about mutiny.”

The jury, which was reduced to seven members from an original panel of 11 that were first called in on Monday, consisted of five Marines and two sailors. One sailor is a surface warfare officer and the other is a SEAL. All five of the Marines are combat veterans.

Under military law, a two-thirds majority, or five members, need to agree in order to find Gallagher guilty on charges of premeditated murder and aggravated assault.

Opening for the prosecution was Navy Lt. Brian John, who showed a photo of Gallagher looking at the camera while holding the hair of a dead ISIS fighter with one hand with a knife in his other. In a text message, he said, Gallagher told a friend that he “got him with my hunting knife.”

“You are going to have a number of SEALs take that stand” to testify against Gallagher, John told the jury, adding that in addition to the killing of the wounded fighter, Gallagher also shot and killed an elderly man and a young girl. “Chief Gallagher shot regularly at noncombatants.”

The prosecutor then pivoted back to events on or around May 3, 2017, when Alpha Platoon — with Gallagher as its senior enlisted leader — was operating alongside the Iraqi Emergency Response Division as it cleared villages of ISIS outside Mosul. Operating in two separate elements — one out ahead toward the front line and another back at their main strong point — John said there was word passed on the radio that there was someone wounded.

It was confusing, and some thought it was an Iraqi casualty. Then they found out it was ISIS, he said. “No one touch him, he's mine,” John quoted Gallagher as saying over the radio. The fighter was then brought back to the SEALs' base by the Iraqis, he said, when Gallagher started performing medical aid along with other SEALs. Eventually he was stabilized, John said.

“About that time, Chief Gallagher pulls a knife and he's going to repeatedly stab the prisoner in the neck,” said John.

He also showed a photo of the ISIS fighter on the ground, with a large pool of blood formed under his next and shoulder. John also outlined efforts by Gallagher after the deployment to allegedly intimidate other SEALs from reporting him, at one point quoting a text message saying that he would “kill motherfuckers” who reported him.

“Chief Gallagher stabbed an ISIS prisoner under his care,” said John, and “systematically tried to intimidate those who reported him.”

The defense, however, opened by framing their case as a mutiny of junior sailors who “unlawfully targeted” Gallagher with false allegations. “You're not going to hear any credible evidence that Eddie Gallagher stabbed him,” said defense attorney Tim Parlatore.

“There is little to no forensic evidence in this case,” said Parlatore, then adding that there was no autopsy, no video, no blood on Gallagher's knife or sheath, no body, and “no case.”

But why would the SEALs lie about their chief?, Parlatore asked rhetorically. Because Gallagher had called members of his platoon cowards for not being as aggressive as he was in combat. Three roommates in particular, Parlatore said, “began fomenting hate” in the platoon.

“There was no murder. It was only a mutiny. Eddie Gallagher is not guilty,” said Parlatore.

After opening statements, the only witness called was Lt. Thomas MacNeill, then the platoon's assistant officer in charge. He was on the stand for about three hours.

Commissioned in 2011 from the Naval Academy, MacNeill was first a surface warfare officer before he transferred to the SEALs. He said he first met Gallagher in 2015 and had a “professional” relationship. He was his roommate during the SEAL deployment to Mosul.

Although MacNeill said he never witnessed the alleged killing, he did describe some things that happened before and after it. He said the ISIS fighter, estimated by NCIS to be about 15 years old, looked “adolescent” and was wearing dirty clothing and had dark hair. Of his injuries, all he noticed was a small amount of blood on his leg.

He said he did witness Gallagher and other SEAL medics working on the fighter, but walked away. At one point, he came back and testified that Gallagher had a knife in his right hand as the two other medics were working. Then later, he saw the ISIS fighter, at that point deceased, with a cricothyrotomy in his neck, tubes coming out of his chest, and a bandage over his leg.

A number of photos of the dead fighter were shown in court.

“Next thing I remember is the reenlistment ceremony being performed for Chief Gallagher,” MacNeill said. After Gallagher was reenlisted near the body by Lt. Jacob Portier, the platoon commander, the SEALs took a group photo behind the body, which was also shown. MacNeill testified that he was in this group photo along with 10 other service members, as well as another photo of Gallagher holding the ISIS fighter by the hair.

In that photo, three SEALs are present in the background, to include MacNeill. He admitted that being in those photos was not “setting a good example” for the junior enlisted members of the platoon. MacNeill also said that Gallagher had threatened him after deployment, telling him, “you take me down. I take you down,” in addition to warning, “I've got shit on all of you.”

Under cross examination, Parlatore attacked MacNeill's credibility by bringing up his testimonial immunity and talking about the amount of time MacNeill had met with NCIS agents and prosecutors — roughly 10 hours — and that he had refused to speak with the defense.

Moments later, Parlatore revealed that MacNeill had previously been arrested on base for assault and battery and public intoxication in March 2013. MacNeill explained that he got into a drunken fist fight and defended himself and was later picked up by military police. He was later brought to Captain's Mast.

“Were you drinking with the enlisted in Iraq?” Parlatore then asked. At this, prosecutors objected and the judge shuffled members of the jury out of the courtroom to discuss the relevance of the testimony. The judge, Capt. Aaron Rugh, allowed it to go forward.

When the jury returned, MacNeill explained that he was “close” with everyone in the platoon. He said he “drank with most, if not all, of the enlisted SEALs on the roof” of their safe house, and also “played DJ.” Parlatore later handed him a photo that made MacNeill smile that was described as a “bar” on the rooftop.

He was also asked by Parlatore whether he had seen empty beer bottles inside a Humvee, which seemed to suggest that some SEALs had been drinking and driving while on patrol. MacNeill said that after he learned of the bottles, he ordered Gallagher to “handle it.”

When asked for the Navy's policy on drinking alcohol in a war zone, Cmdr. Tamara Lawrence, a spokeswoman for Naval Special Warfare Command, told Task & Purpose in an email that “the drinking behavior described in testimony today is a clear violation of standing orders in the [Central Command area of responsibility].”

MacNeill's judgment was further called into question when asked whether other SEALs had posed alongside the body of the dead ISIS fighter. Asked by Parlatore whether he would be “surprised” if he were shown other photos of SEALs besides Gallagher posing with the body, MacNeill said he would not (Parlatore did not show any of these purported photos on Tuesday).

Parlatore also brought up a platoon video that was edited together of their photos and videos from the deployment, mixed to music, which they all shared amongst themselves. “Yes sir there are,” MacNeill said in response to whether the video showed many photos of dead bodies.

Under redirection, prosecutors asked whether Gallagher had also been drinking in Mosul. MacNeill said he had seen him do so on “one or two” occasions.

The Gallagher trial is expected to last for about two weeks. Three additional SEAL witnesses are expected to testify on Wednesday.