Gallagher is accused of murdering a wounded fighter and separately firing on innocent civilians during a deployment to Mosul, Iraq in 2017. He has pleaded not guilty. 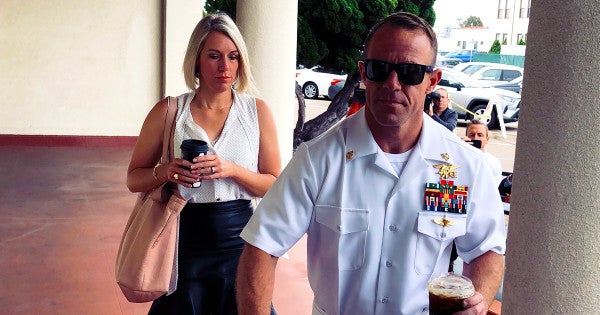 NAVAL BASE SAN DIEGO — A Navy SEAL sniper testified on Friday that he fired warning shots to scare away a civilian noncombatant in Mosul before Chief Eddie Gallagher fired and told them over the radio, “you guys missed him but I got him.”

Under direct examination by prosecutors, Special Warfare Operator 1st Class Dalton Tolbert recounted the alleged shooting of an old man along the Tigris river during the Battle of Mosul in 2017. At the time, Tolbert was a member of SEAL Team 7 Alpha Platoon who was stationed in the south tower of a bombed out building, while Gallagher and others were stationed in the north tower.

Tolbert testified that he was scanning windows along the riverbank searching for targets when he noticed a man moving closer to the river. As another SEAL explained in previous testimony, firing warning shots to keep civilians off the battlefield was a standard practice, according to their rules of engagement.

The man then ran from the river to a nearby building and tried to go inside, but the door was locked, Tolbert said.

“He ran north to south across the road,” Tolbert said. “That's when I saw the red mark on his back and I saw him fall for the first time. Blood started to pool and I knew it was a square hit in the back.” Over the radio, he said he heard Gallagher tell the other snipers, “you guys missed him but I got him.”

Tolbert said the man, who was wearing traditional garb, then stood back up and ran away.

The area of Mosul where the SEALs were operating in.
Photo: Screenshot/Google Maps

Gallagher is accused of murdering a wounded fighter and separately firing on innocent civilians during a deployment to Mosul, Iraq in 2017. He has pleaded not guilty.

“I saw Eddie Gallagher shoot someone who didn't deserve to die,” Tolbert testified. “I shot more warning shots to save civilians from Eddie than I ever did at ISIS.”

Under cross-examination, Tolbert said he did not tell other snipers over the radio that the man he was firing on was a civilian he was just trying to scare away. He explained that he didn't say anything since each tower was typically covering their own sectors of fire (it was not clear which tower in this incident was firing in the wrong sector).

“As far as anyone knew, you were shooting, not warning,” said defense attorney Tim Parlatore.

Parlatore also questioned Tolbert on differences between his statements to NCIS agents and what he testified to in court more than a year later. In previous interviews, Tolbert told investigators that the man ran in a zig-zag pattern after he fired warning shots, and when he was shot, he did not stand up but crawled away.

Of the zig zag pattern, Tolbert said he had “misspoke” then and explained that his testimony on Friday was truthful because he “had more time to remember” what happened.

“When you told NCIS over a year ago” that the man stood back up, Parlatore said, “that was another failure of your memory?”

The defense team for Gallagher has accused some SEALs of conspiring against him to have him removed from leadership, since they did not like his style and aggressiveness. In text messages Parlatore read in court between some of the SEALs, he quoted Tolbert as saying they should report their leadership to mental health professionals so “it can be used as ammo later.”

He also brought up text messages Tolbert sent that were critical of the judge — a Navy captain who he called “shady” and a “pussy” — and Parlatore, who he referred to as a “fucking retard lawyer,” in addition to claims that he currently worked with people who didn't care about killing innocent civilians.

“If you don't care about killing civilians, that's your business,” Tolbert wrote in one text message. “I work with plenty of guys that don't.” Tolbert confirmed in courtroom testimony that he was now assigned to Naval Special Warfare Development Group, a classified unit commonly known as SEAL Team 6.

Asked about this claim, Tolbert said he did not actually know whether others in SEAL Team 6 believed what he had said, adding that the text message he sent about killing civilians was “inappropriate.”

“I assume they care about killing civilians,” he said. Tolbert said he had not yet deployed with the unit, which is based in Virginia Beach, Va. “I probably won't,” he said.

“The people you're lying about are your current teammates, correct?” Parlatore asked.

In later testimony, Special Warfare Operator 2nd Class Joshua Vriens recounted a separate shooting incident from the SEAL sniper positions, in which he said a young girl was shot as she was walking under a bridge across the river.

After hearing firing from the north tower, Vriens — who was stationed in the south — said he aimed his scope towards the bridge and saw four little girls.

“As soon as I looked at those four girls, I saw the girl in the gray dress clutch her stomach,” Vriens said. Other girls ran away while one girl, who was wearing a blue dress, attempted to drag the wounded girl away to safety.

Vriens testified that he immediately mentioned the incident to his platoon commander, Lt. Jacob Portier, though he did not mention Gallagher. “Hey Jake, I think ISIS is shooting civilians again,” Vriens remembered saying.

Vriens also testified that he did not see the alleged murder of a wounded ISIS fighter but viewed photos of the body afterward. Later on the day of the alleged killing, Vriens said he saw photos of the dead militant being viewed by another SEAL on a laptop, who asked Gallagher, “is this the guy?”

Seeking to challenge Vriens' credibility, Parlatore brought up text messages and his previous statements to investigators. When Tolbert said in a text message thread that they were planning to go to the SEAL Master Chief about Gallagher, Vriens wrote, “ha. I'm down,” adding, “he used me as bait. IDGAF.”

In another instance, after former SEAL Marcus Luttrell, a Navy Cross recipient, criticized those who had reported Gallagher as “cowards,” Vriens texted the group: “I can't help but shake my head when Marcus Luttrell calls people cowards. He's got more imagination than J.R. Tolkien.”

Vriens' testimony also revealed that he had spoken with a reporter about the case, Andrew Dyer of San Diego Union-Tribune, and NCIS Agent Joseph Warpinski, the lead investigator, had sent him photos from their investigation in Iraq that he later shared with others.

Vriens also claimed to investigators that Gallagher had been “stalking” him, though Parlatore mentioned that both SEAL teammates lived near each other and would normally pass by each others' homes.

“Did you do this with the specific intent that Eddie be sent to jail before trial?” Parlatore asked.

“Yes sir, I did,” Vriens responded.