A military jury sentenced Navy SEAL Chief Eddie Gallagher to a reduction in rank to E-6, along with four months confinement and forfeiture of pay. 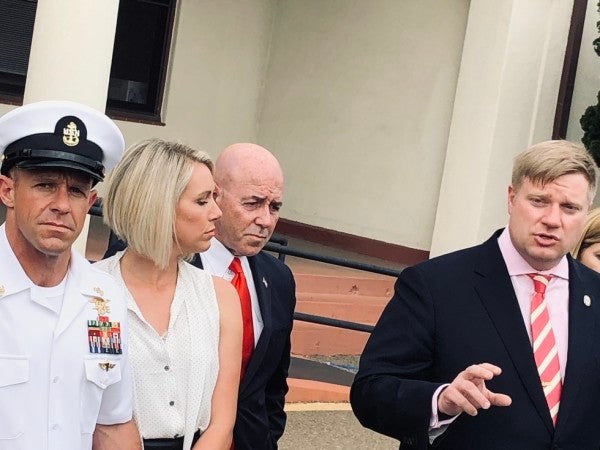 A military jury sentenced Navy SEAL Chief Eddie Gallagher to a reduction in rank to E-6, along with four months confinement and forfeiture of pay on Wednesday.

The jury found him guilty on only one charge on Tuesday: unlawfully posing for a picture with a human casualty. Prosecutors showed two photos of Gallagher posing with a body throughout his trial. Other SEALs, including some witnesses who testified against him, were also in the photos.

One photo frequently shown during the trial showed Gallagher, wearing a ball cap, kneeling next to the deceased ISIS fighter while holding his knife as three other SEALs are seen standing behind him. Another showed Gallagher similarly posing with nearly a dozen other members of SEAL Team 7 Alpha Platoon posing for the shot.

Gallagher served about eight months in confinement prior to going to trial, so his four-month sentence will be chalked up to time served. Two months of the pay forfeiture were suspended due to pretrial restrictions, according to Andrew Dyer of San Diego Union-Tribune.

His defense attorney Tim Parlatore told Task & Purpose on Wednesday that Gallagher is about two weeks away from being eligible for retirement, and will likely separate from the Navy; now, it will be as a Petty Officer 1st Class.

The sentence is not yet final.