The SEALS have faced a remarkable fall from grace, yet Special Operations Command claims the problems they face are not systemic. 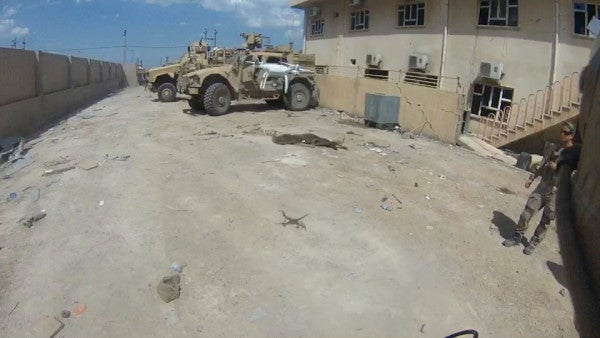 SEALs were walking on water as the best military force in the world a decade ago. They killed Osama bin Laden in Pakistan. They rescued Capt. Richard Phillips from Somali pirates. No one seemed more professional or capable than they were.

The only thing more remarkable about how much esteem the SEALs had is how far they’ve fallen since then. In the latest disgrace, the special operations commander in Iraq just unceremoniously kicked out a SEAL platoon, “Due to a perceived deterioration of good order and discipline within the team during non-operational periods,” U.S. Special Operations Command has announced.

“The Commander lost confidence in the team’s ability to accomplish the mission,” A SOCOM news release said.

Defense officials are not saying exactly what these special operators did to deserve being sent back to San Diego early, but Navy Times Editor Carl Prine revealed the SEALs allegedly threw an alcohol-soaked July 4th party.

Coincidentally, the SEALs came from the same team as Eddie Gallagher, who was recently found not guilty of murder after being accused of stabbing a wounded ISIS fighter to death in Mosul in 2017, according to San Diego Union-Tribune reporter Andrew Dyer.

Although Gallagher was cleared on the most serious charges, he was found guilty of unlawfully posing with an enemy corpse. Others in the SEAL platoon were also in those photos, and the court-martial subsequently revealed those SEALs constructed a bar at their compound and were regularly drinking alcohol.

Gallagher’s commanding officer is scheduled to go to trial in September. If that weren’t bad enough, Navy Times reporter Geoff Ziezulewicz recently reported that six members with SEAL Team 10 who used cocaine and other drugs were able to pass their piss tests by replacing their urine for clean samples, according to an internal investigation.

Meanwhile, two SEALs have been implicated in the hazing death of Special Forces Sgt. Logan Melgar in Mali. Navy Special Operations Chief Tony DeDolph is accused of placing Melgar in a chokehold until he asphyxiated. Navy Chief Special Warfare Operator Adam Matthews, who pleaded guilty to hazing, assault, and other charges in May, is also under investigation for allegedly trying to flirt with and manipulate Melgar’s widow.

But If the first step in solving a problem is admitting you have one, the Navy SEALs have a pretty long way to go before hitting bottom. When asked about the numerous criminal investigations involving SEALs, SOCOM’s senior enlisted leader’s message was: Remain calm; all is well.

“We do not have a systemic problem,” Air Force Chief Master Sgt. Gregory Smith said shortly before news broke that the SEAL platoon was being kicked out of Iraq. “We have a pretty large population of Navy special warfare and overwhelmingly the vast majority – 99.8% are at the top of the line.”

SOCOM understands the leaders are responsible for knowing about and responding to ethical and disciplinary lapses, so the command has “been holding significant leadership accountable,” including platoon and section leaders, Smith said.

He was unable to say which leaders he was referring to or what administrative or disciplinary action they have faced.

On the matter of unauthorized punishments, Task & Purpose asked Smith about the prevalence of hazing in the SEAL community.

When he pleaded guilty in the Melgar case, Matthews claimed that he and three other U.S. special operators planned to duct tape Melgar’s wrists and ankles because binding people is “a form of remediation” in the special warfare community. (Washington Post reporter Dan Lamothe subsequently revealed that Matthews and the others also planned to make a video of a security guard sexually assaulting Melgar.)

Smith disputed Matthews’ claim that SEALs and other special operators frequently discipline their own by tying them up with duct tape.

“I have been in this community for 25 of my 30 years and I have never been exposed, seen or heard of binding people up as common practice within our community – and that is within the joint force,” Smith said.

SEE ALSO: Eddie Gallagher was found not guilty on the most serious charges, but he could still leave the Navy as an E1